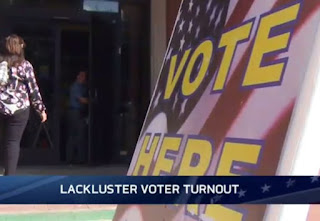 A KGNS reporter made note yesterday of the disappointing turnout for the first day of early voting.  Most Webb County voters were apparently busy doing something else, while only a paltry dedicated 3,341 voters took the time to cast either an absentee ballot, or to show up to a polling place.

Stories flowed online yesterday about brisk voter turnout in cities throughout the nation.  The only thing that hinted at that trend locally was a photo that a friend posted on social media: a line of people waiting to vote at Providence Health Center.  It was a good sign, I thought, until the reporter's caption graced our TV screens.  Thanks a lot, tv reporter!

Bobby Blanchard of The Texas Tribune listed the TX counties that performed the best. 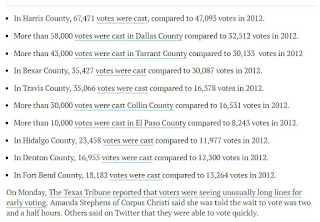 The list above cites Hidalgo County, which includes Mission, Edinburg and McAllen, TX.  In nearby Cameron County (Brownsville), The Herald reported 6,581 ballots being cast.

I could tell you that our ballots, replete with 24 city charter amendment propositions, are keeping voters away from the polls.  It could be that local constituents are taking their time to study each proposition before making a decision.  But voter apathy is not a new thing.

In the fall of 2008, I blogged about low numbers.  In 2012, then-Mayor Raul Salinas showed his discontent for the lackluster voter showing.  And in 2014, there was a low turnout again.  That was a mid-term election.  Nevertheless, we'll use it to make our point.

I don't even want to guess anymore at why voters in Webb Co. aren't showing up to the polls.  We lag behind in so many areas.  Voting, or the lack thereof, just adds to our list of deficiencies. 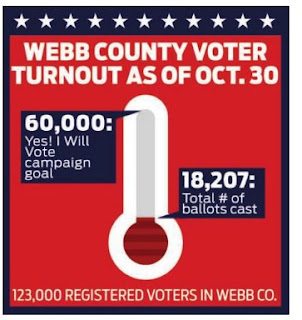