Henry Cuellar made another announcement of the airport receiving federal funds.  The money is to go toward improvements.  I'm going to start keeping track of these FAA grants because it seems like it's an all too common occurrence.

From the scant blogging I've done on this subject, there was:

The video interview in 2008 where Cuellar talks about money for the airport.

And in 2012 I wrote about the list of grants the city gets, FAA monies included.

So it appears that these monies are ours for the taking.  Every year, Henry Cuellar and our local officials gather at the airport and take another photo to commemorate another hefty grant.  You would think they would get tired of this ritual. 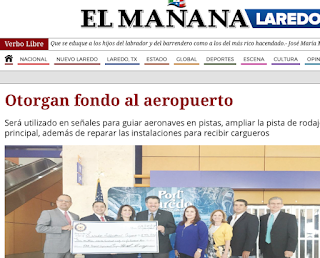 City officials and Rep. Henry Cuellar held a press conference this weekend to announce the awarding of more federal money to our humble airport.  The millions will be used for upgrades and gratuitous photo ops.  And our city leaders will have one more convenient justification for making trips to Washington. 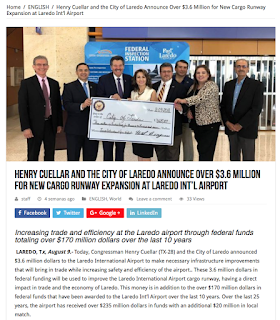 Photo above is self explanatory.  Cuellar gets recognized for singlehandedly securing MORE federal funds, courtesy of the FAA.

UPDATE: November 30, 2019.  Earlier this week, Henry Cuellar announced more federal funds for the airport.  It's the perfect place for a press conference and free political advertisement -- the airport has got a lot of space, great lighting and enough parking for all the big SUVs that have to carry all the willing participants of this charade.

Seriously, how is this news if it happens every year, with the same stuffed suits? 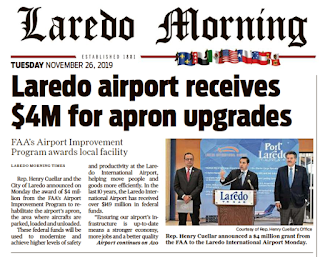 UPDATE: September 18, 2021: another photo in the paper for another check that Henry Cuellar was responsible for, allegedly. 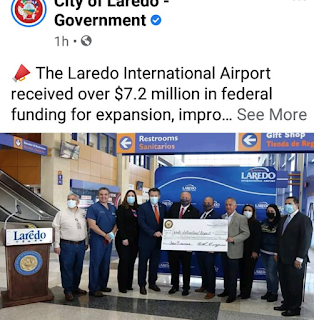