Former City of Laredo spokesperson Xochitl Mora did an interesting thing the other day: she shared with her old media contacts an article that highlights the glory of McAllen, TX. 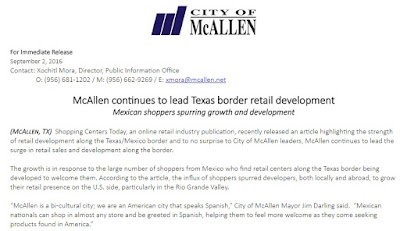 Mora moved to McAllen last month to be the spokesperson for the valley metropolis that apparently sets the standard for all the others.  She packed up and moved on to greener pastures.  The new chapter in her life, however, did not include a purging of her old email blast list.

Oh sure, I enjoyed getting rain total updates, and bridge revenue reports when she worked for our humble hamlet; But she's got a new boss, and audience now.  Her focus should be directed towards keeping valley residents in the know.  When I signed up for email updates from Ms. Mora, I expected to be kept aware of local happenings, not McAllen's.  She's now assuming that we all want to know, and that we should know, what's going on outside our borders.

One of her followers didn't appreciate the media alert.

The reason I take issue with Mora's approach is centered on getting unsolicited information from a person with whom I didn't have a personal connection.  When she was in Laredo, I asked her a question or two about local business, and that was it.  Our acquaintance was simply professional and distant.  Her recent outreach isn't really a surprise, however.  The McAllen press release she sent out to her Laredo contacts is typical Xochitl Mora.

In 2010 I took issue with Ms. Mora making an announcement on behalf of St. Peters Memorial School.  She promoted the private school to the media contacts she acquired through her role as a city staffer.  It was done on several occasions.  She overstepped her boundaries and she's still doing it.

The writer (in the featured passage above) who criticized Mora in an email reply spoke to the expectation of trust in establishing a professional relationship.  I appreciate his point of view, especially if sensitive information is going to be shared.  At the very least, Ms. Mora's approach is lazy and unconcerned with details.  I can probably block her updates, or ask to be excluded from the mailing list.  But it would be more thoughtful of her to ask her contacts if they want to continue getting press releases from a different city.

There is an etiquette to email.  Unfortunately Xochitl Mora still hasn't figured that out.
Posted by KeyRose at 10:00 AM