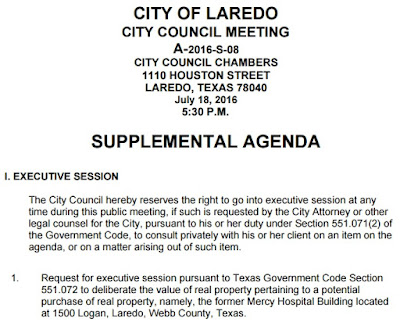 Alex Perez still has a couple of years left on city council and I guess he wants to impress his Heights area neighbors by attempting to clean up the Carranco's mess of a building, the old Mercy Hospital.

The facility was vacated in the fall of 1999.  It never saw another bright day again.

Instead of forcing the owner's hand, the city thinks it's a wise enough idea to tackle the problem on its own.  Perhaps they're right.  It could be that city hall can put the building to good use in some type of public capacity.  It's apparently of no value commercially.  My reservations, however, lie with the manner the City of Laredo has managed other properties they've acquired in the past.  Their handling of other locales leaves much to be desired.

It's apparent that the old hospital needs to go.  But far be it for me to have a say in anything.  Only our city leaders know what's best.  I'm just waiting for someone to say that the facility will be dedicated to something for the arts.  That seems to be the go-to answer for other buildings.
Posted by KeyRose at 3:52 PM