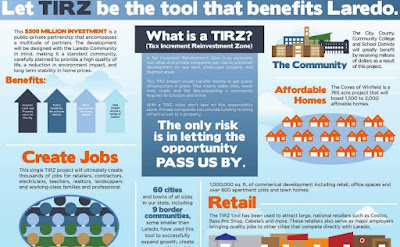 Who knew that land development could be such a divisive issue?  On the one side you have the Killam people - the ones that probably paid for the Laredo Times ad pictured above - Mayor Pete Saenz, Charlie San Miguel, Alex Perez, and George Altgelt.  On the other you have Roque Vela, Roberto Balli and the two freshmen council members.  All I know about this TIRZ matter is that the Killam person wants to put up housing and commercial property on his land with the help of our tax money.

I don't know how this Coves at Winfield project is any different from other construction endeavors along the loop in north Laredo.  But proponents of the plan talk about it like they're re-inventing the wheel or something; and to vote against it would be a huge loss for the city.

I understand that the plan consists of developing hundreds of acres of land, and for that, the Killams need help with the financing.  But don't paint this as a benefit for the entire citizenry.  How is The Coves going to help me in my neighborhood?

The Coves plan sounds too good to be true.  The city will not take on any risk, or so it has been said.  It's an ambitious plan and some people would stand to benefit.  But let's talk about it realistically and talk about the shortcomings as well as the upsides.
Posted by KeyRose at 4:04 PM