This is a copy of the check which went to the purchase of the Canseco house.  The property is located on the corner of Chihuahua and Seymour Ave.

I previously wrote about the home's appraisal by a local agency.  And I also wrote about the appraisal done by Southwest Appraisal Group.  Their valuation was much higher, but they made note that the house was basically useless.  Southwest recommended tearing the house down and developing the property as a commercial site.

Three weeks ago, at a special meeting, city council made the motion for staff to obtain HUD funds to renovate the CANSECO HOUSE (name that Alex Perez insists on) grounds.  The amount they'll ask for is $400,000.  Not sure how much they can do with that amount of money, but okay.

To make ends meet for the project, Councilman Perez could offer up some of his discretionary funds.  And he'll probably have to pass the plate around so his colleagues can fork over some of their district moolah, much like Roberto Balli and Juan Narvaez are doing now for the proposed Don Tomas Sanchez statue.  The money will have to come from somewhere. 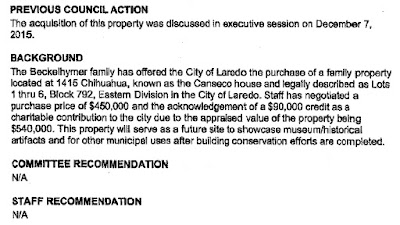 What's troubling about the Canseco house purchasing is that its negotiations took place behind closed doors.  And as of late last month, city hall is up to it again, this time in considering to buy the old Mercy Hospital in the Heights area.

Roque Vela compared buying the Canseco house to an unintended pregnancy.  The house belongs to the city and they now have to care for it.  What we need now to guard against such frivolous purchases is the neutering of city hall.  If they can't be transparent and better stewards of public money, then no more playing doctor with willing participants.
Posted by KeyRose at 9:20 AM