In A Supporting Role 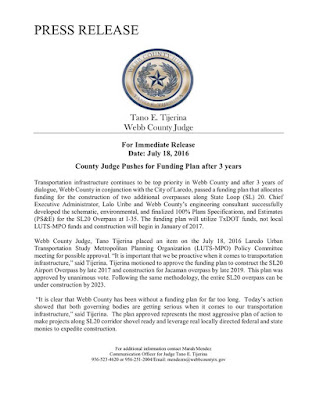 Somebody at county sent out a poorly-written statement using letter head belonging to one Webb County Judge Cayetano* Tijerina.  The announcement informed media outlets about the planned construction of overpasses on Loop 20.  That's music to Laredoans' ears who have to deal with crosstown traffic.  The thing that makes this presser even more cringeworthy is the appearance that Tijerina is taking credit for the roadway additions.

The judge is a member of Laredo's Metropolitan Planning Organization.  The group includes city leaders, and they welcome input from the public concerning infrastructure needs.  The money for road work comes from the state and federal level. 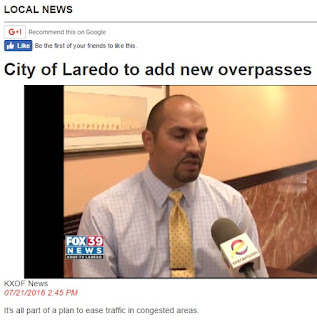 I applaud Judge Tijerina for making himself available to the public: He recently hosted a 'Platica and paletas' event, where he met face-to-face with constituents.  But it should be made clear that these road projects he speaks of are a result of our tax money being put to good use.  And he's not really representing the county or using county resources for improvements.  He's a person (who happens to be the county judge) who sits on a committee that decides how to spend taxpayer money.

I know it sounds pessimistic for me to be singling out the county judge, but context matters, I think.  Government entities are entitled to public funds like those that belong to the MPO, and the COPS program, and the CBDG program.  Updates on progress are good; just don't turn these announcements into political chips to cash in later.  Don't include these moments in your re-election campaign.  I know it'll be temping to do so, but it just can't happen, especially when the county is facing a major budget deficit due to oil/gas lease losses.

Departments are being told to make drastic cuts to their budgets.  Colonias won't have any trash pickup any more.  The veterans museum is still on hold.

This concludes my observation for this week.
Posted by KeyRose at 9:32 AM