Planning For The Future

Viva Laredo succinctly states its purpose on its website:


In a collaborative effort between the city government, the experts in the field of urban planning, and the citizens, a comprehensive plan is created to guide a city's growth.  It is essentially a collective vision for what people want a city to become - whether that means having more parks or less traffic.

The group hosted a town hall meeting at the south Laredo library on Tuesday.  Their focus is to update our city's master plan, a feat that hasn't been done in more than twenty years.  What they want from us is input.  They want to know what we think is important for the city as Laredo grows over the next two decades.

When I first heard about this, I thought: doesn't the city have its own planning department to actually plan a city?  Why is the City of Laredo looking to people who receive city contracts architects to create a new master plan?  I went to the meeting to get a better sense of it all. 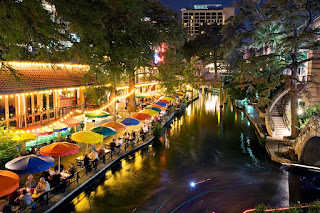 One of the first images a Viva Laredo team member presented to meeting attendees was that of the Riverwalk in San Antonio, TX.  She explained how every detail in that setting is carefully planned and implemented.  A street in downtown Austin was also featured in the slide show.  (I should've timed how long it took them to mention these two cities.)  Whenever the subject of Laredo's revitalization comes up, the Riverwalk and 6th Street are mentioned.  Apparently those two sites make up the extent of our traveling habits.

I get why the speaker displayed the image shown above: destination hot spots don't develop by accident.  But in trying to make a point with a picture-perfect setting, you remind us of how much we're missing and how long we have to go to reach our goal.

Portland, OR was also discussed.  A nice city, but polar opposite when compared with Laredo's climate and lax regulation of development.

City leaders spoke briefly.  Councilman Balli said downtown Laredo is going through a renaissance.  (He just got back from Europe; that explains the word renaissance.)  That's good in a way.  Downtown Laredo needs new life.  I feel, however, that the most vulnerable in the area will be left behind.  What use do they have for the swanky Siete Banderas restaurant, or the Michael Kors store that's set to open at the outlet mall? 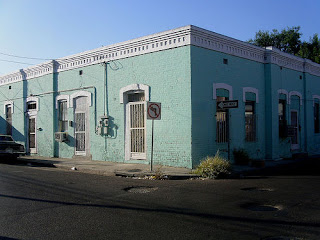 A Viva Laredo spokesperson uttered the words 'low hanging fruit,' as in identifying those projects that can be worked on ASAP.  I take that phrase to mean projects that can be easily financed and contracts that can be handed out by the city in a swift fashion.  If you ask Laredoans what's their idea of a perfect city, most will probably answer with the inevitable: a water park.  That's natural because it would give people something to do.  Nevermind that Laredo has swimming pools scattered throughout its city limits.  Having tourist attractions is important for any city, but what about the less-romantic needs that should've been brought up at the meeting?

My ideal would be living in a neighborhood that didn't have to endure the noise that trains make.  They have loud horns that blare at night; but we also have lights with bells and guard rails that signal to us when a train is coming.  I say NO to train horns!!!   Accessibility to the downtown area by foot, bike, or car would be nice.  Storm water management along the Chacon Creek is a big one.  If the Rio Grande rises, water backs up into the Chacon, thus blocking the south Meadow Ave. bridge.  That puts a damper on a major route for people that live in south Laredo.

A new cemetery.  Another landfill.  (not CY's)  A secondary water source.  Better transit options.  I think a distinction needs to be made between what Laredoans want and what we actually need.  For most of us, getting around in a car is the norm; what do we care about walkability or public transit?

We should actually care about those things because they're important for many reasons.

The closing of many downtown stores - HEB being one of them soon - should guide our focus a bit.  Let's work on a plan that will get more people to the old business district.  Let's think of the low hanging fruit that we as citizens can put into action by ourselves.  Let's identify the strengths this town has and build on those.  We will never be Austin.  And we shouldn't try to be.  All I can offer is what I think can make life better for us as a community.  I can tell you what I think doesn't work.

I think Viva Laredo does want something better for this town.  The conflict I see is that they stand to benefit from this and that will blur the lines of what Laredo needs to become.