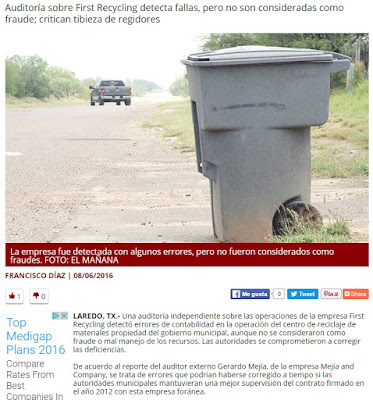 Mr. Gerardo Mejia, a local accountant, gave city council a financial report of First Recycling (F.R.), the company that's in charge of running the city's recycling facility.  The audit was presented at Monday's meeting.  Local activist group Our Laredo had been hounding city hall about FR's finances since last year.  Answers finally came, but questions still linger.  Our Laredo feels that their concerns were proven right by the accounting firm.

Mr. Mejia's report went on for about half an hour.  There were a lot of numbers and tables.  In between the tedious presentation there were questions by Councilman George Altgelt.  He needed clarification on several points.  At one point, Altgelt apologized to Mr. Mejia for asking another question, but quickly took it back, as he saw it fit for him to be asking questions about the audit. 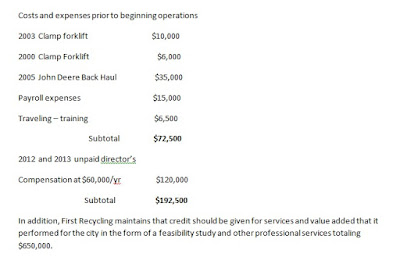 First Recycling started managing the recycling facility in 2012.  The city chose them over three other companies.  The city started a blue bin pilot program in the Heights neighborhood in the spring of 2012.  By the following year, the entire public got a recycling bin.  Before that we were all using blue plastic bags to recycle our stuff.  First Recycling states that they tripled recycling intake in 2012, compared to the time that city staff managed the facility.

That's a bold statement to make, considering that city trucks and staff were the ones picking up the materials throughout Laredo's barrios.

Anyway, one of the things that I found interesting in the report was the listing of purchases that First Recycling made, and was apparently requesting credit for.  (See list above)  Mr. Mejia went over those items in front of city council.  Saul Villarreal of FR clarified that those purchases were merely to show what the company had invested in the lead up to its managing responsibilities.  They didn't want credit for $192,500; they just wanted to show their commitment to the city.

Okay.  And I guess we're to believe that he and another director went without a salary for 2 years. 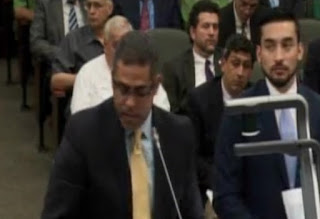 As soon as Mr. Villarreal went up to the podium to defend his work, he cited the losses the city had prior to First Recycling taking the reins at the recycling facility.  He even took issue with a prior statement made by a city director which claimed that it was only when the city was in charge that a profit was made.  Nobody on council jumped to defend the Solid Waste Director.

Council members and Mayor Saenz didn't even ask about the incomplete records that were kept by city staff.  Mr. Mejia explained that quarterly report information was missing.


We requested all of these reports from the city and we got them all in a flash drive; And not all of the quarters were there.

Irregularities were plenty and conflicting information was presented, but most of our leaders deferred to the city manager to figure it all out.  It's amazing.  Our garbage fees were increased so that the recycling facility could be established.  They pour a ton of money into the facility and then give the contract to a company that was created out of thin air.  Nobody, it seems, is minding the store, and city council is not impressed by all the inconsistencies.

Even when the auditor mentioned that it wasn't clear who gets what cut in the 70/30 profit-sharing plan, nobody blinks an eye.  After the third year of managing the recycling center, FR was to keep 70 percent of the profits, and the city would get 30 percent.  But Mr. Mejia saw it the other way around.

Our Laredo has mentioned the lack of profit sharing up to now.  But, as Mr. Mejia noted, the contract was amended after the original terms were put forth, so FR isn't really obligated to share 30 percent of its profit until now.

The audit also found that FR kept five bank accounts for their business.  There were input errors in the company's reports.  Mejia noted that an amount of $4,400.00 was entered to account for sales, when it should've been $47,000.00.  Employee agency expenses were duplicated in original reports in 2014.  Red flag, after red flag, after red flag, and city council acted like it was no big deal.

Mr. Saul Villarreal didn't contest any of these things.  All he was prepared to do was to show how the city was worse off (according to him) when city staff ran the recycling facility.  And city council was happy with that.

It's said that we get the government we deserve.  That's true.  But when we all have a stake in how government is run, we deserve better on a daily basis, because we pay taxes, and not just because we may or may not vote.  Again, I applaud the people of Our Laredo for keeping our leaders' feet to the fire.

Email ThisBlogThis!Share to TwitterShare to FacebookShare to Pinterest
Labels: City of Laredo, First Recycling, Our Laredo