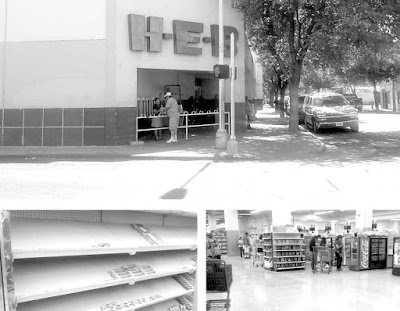 Tucked away in page 8 of today's Laredo Times are photos of a fading HEB store in downtown Laredo.  Customers are scarce and the shelves look depleted.  In less than a week, this oasis of foodstuffs will be a mere memory.

For about the last two years I had been shopping at this HEB on a weekly basis.  Despite its limitations, the store provided a different, more comfortable pace for me.  It's where I could escape the chaos of the other locations.  It didn't have all the products I needed, but the store made up for that in different ways.  I could always count on a parking spot on San Agustin Ave; that was basically like parking right in front of the store.  For a good stretch, they had 80s music playing on the overhead system; that feature always made shopping fun for this GenXer.  And in some way, the store connected me to a bygone era, a time when downtown Laredo still had a lure for shoppers.

The downtown HEB satisfied the longing I had for the days when I would shop with my mother or grandmother in el centro.  HEB hardly defines downtown today, but it's a recognizable holdover from our youth.  To witness its demise is to witness our past wither away. 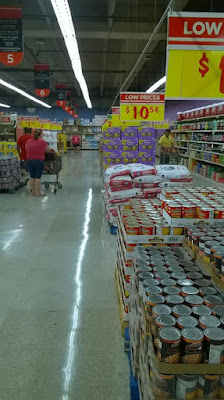 In becoming my mother's quasi-guardian, I took to the downtown HEB to get the things she needed.  Over the years, the errands I ran for her weighed on me; they became more tedious.  The downtown HEB, however, gave me a fresh take on the tasks at hand; and perhaps, in some subconscious way, it offered me a link to a simpler, less demanding time.

My visits to HEB downtown seemed less laborious -- Parking was less of a hassle, and the ambiance was much more soothing.  It was somewhat therapeutic shopping there.  The emotional and psychological burden I carried was lifted by the pleasant experiences I had at that store.  I'm sure it's hard for you to understand that, but maybe it's because I thought of the facility as a place where I could escape to.  I didn't know a lot of family members and friends who shopped there.  When I told them that I would buy groceries at this location, they were dumbstruck, bewildered by the fact that someone could actually shop at this spot.

It became my store, and mine alone.  It was a sort of refuge from everyone and everything around me.  It helped me disconnect for a while, even if all the items I was purchasing were for my ailing mother. 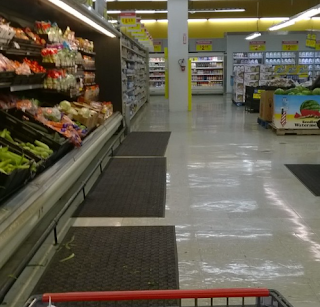 In handling mom's finances, it became apparent that keeping our own budgets separate was important; It helped to keep things in order.  So when I went to shop at the downtown HEB, I knew I was there for her groceries.  It became part of my weekly routine.

My mother passed away two months ago and a lot of things that were routine have gone by the wayside.  Now I'm adjusting to having more time for myself.  I have to adjust to a new routine.

It's somewhat peculiar that, on the same year that my mother passes, the downtown HEB closes.  I can't help but think that the two are connected.

The life around me is changing, disappearing before my own eyes.  The connections to my past are fewer and fewer.  Most Laredoans won't give a second thought to the closing of the HEB on Sunday, because it'll be another mundane event.  I want to visit the store one last time.  The place will look like a shell of its former self.  I'll say my own goodbye.  And in the near future I'll just be able to stroll down the sidewalk of a place that once held something for me.