We Can Guess Who Gave Money 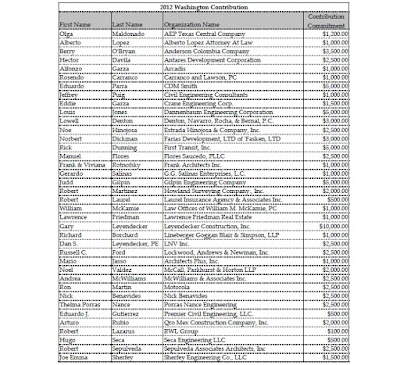 Pictured above is a partial list of donors who gave money to the City of Laredo so they could go to Washington, D.C. in 2012.  Questions are being asked again about the solicited donations for this year's trip.  City hall, however, is dragging its feet on releasing the list of donors.  All they are saying is that the city's legal department sees nothing wrong with taking money from local businesses and business people to use for an extravagant outing to the east coast.

Last night, city hall authorized staff to give Civil Engineering Consultants a contract.  These consultants have donated to the city before.

We may never see the list of donors for 2016, but we can guess who paid for the city's food, alcohol, lodging, etc.

UPDATE on 5/5/2016:  Our Laredo got the list of businesses that contributed money to the city.  Accordingly, some of those businesses were awarded city contracts by city council at Monday's meeting.  See list below. 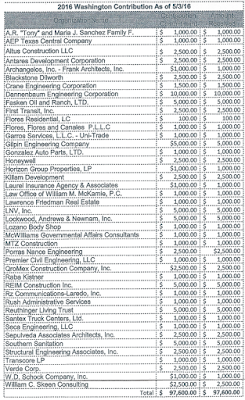 Email ThisBlogThis!Share to TwitterShare to FacebookShare to Pinterest
Labels: City of Laredo, donations