Laredo In The Movies 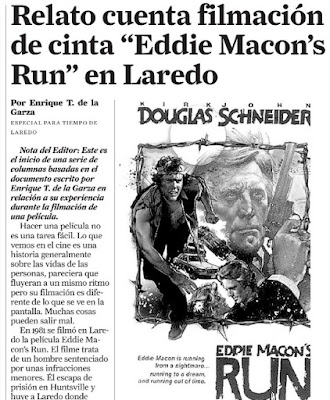 El Tiempo de Laredo ran an article on May 4, 2016 that detailed Enrique T. DelaGarza's involvement in the filming of "Eddie Macon's Run."  The movie, starring John Schneider and Kirk Douglas, was filmed in Laredo in 1981.  It's a story of a man running from the law, and trying to make it to the border of Mexico.  (Christopher Cross's "Ride Like The Wind" aptly fits the plot; but there's no connection to the movie.)

Mr. DelaGarza explained that it was by chance that he came to meet the movie's producer and director.  He went to visit a friend at the Chamber of Commerce when he was asked if he could help the movie-makers scout the city.  He obliged and the rest is history.

I've obsessed over "Eddie Macon's Run" on this site before.  But a casual blogger can only milk another post from an obscure flick for so long.  Mr. DelaGarza's input, however, adds some new perspective.  I'll be on the lookout for more updates from El Tiempo.

"Lone Star" also has a Laredo connection.  The 1996 movie features the grounds of Laredo Community College in a couple of scenes.  Unfortunately, it doesn't match EMR's nod to our fair city.  But a new feature film may do just that.

The trailer for "Journey" was posted on YouTube yesterday.  Click on the link to get an idea of the movie's plot.  (Hint: it's not about an 80s pop group.)

Our city is seen throughout the movie teaser.  There may be something to Laredo just yet.