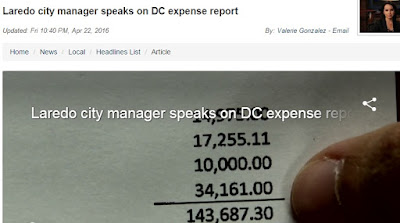 City officials gladly explained (again[cue eye roll]) to media outlets why they spent so much money at their pre-Spring Break trip to Washington.  Nothing was said that we didn't already expect from city hall.  They defended the trip and its expenses as necessary in order to draw more federal funds to our dusty, little hamlet.  Their hobnobbing with D.C. officials helps to strengthen ties between local and federal agencies, and thus, benefits Laredo in the long run.  So don't pay attention to the thousands that were spent for catering or for booze ($20,000).  It's all good. 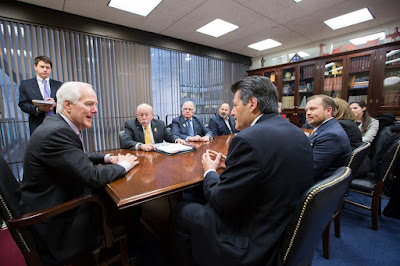 When KGNS reporter Valerie Gonzalez asked the city manager whether a conflict of interest existed between the people who 'donated' money for the trip, and the City of Laredo, Mr. Olivares allayed our concerns.

"I don't think so. This is all something that has gone through the legal department. And, we feel that if we can defray some of the costs, that means that we don't have to use that money that we can use for other services here in the city", said Olivarez.

If the legal department says it's okay, then I'm convinced.  I don't know why I'm preoccupied with such things.  All other cities in Texas must also take 50 people to Washington every March.  All other cities probably pass the plate around to get donations from local businesses.  All other cities must throw receptions in D.C. for 500 people.  And all other TX cities spend $20,000 on alcohol.  For me to think that this is some sort of pay-to-play scheme is preposterous.  Don't be a fool, Keyrose!

Of course, the city is never going to release photos of everybody that went on the trip.  And they're definitely not going to post photos on their Facebook page of them boozing it up with federal public servants.  There are things that are better left unseen.  (As far as I know, the list of donors has not been released by the City of Laredo.)

I'll continue this post next year when we'll, again, be talking about this subject.  We'll ask the same questions and the city will give us the same answers.  Adios. 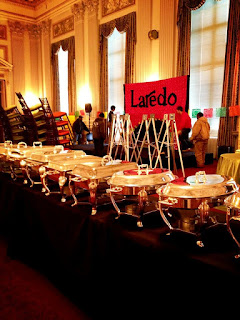