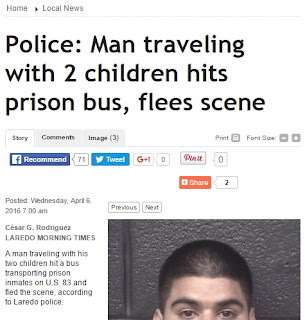 It's Menso not Mensa time again.  Definitely overdue since my last post may have been two years ago.  The details of this entry may not be spectacular but I'll let you be the judge.

For your consideration we have a 23 year-old man who rear-ended a bus transporting prison inmates.
(That in itself could've been the end of our case if the inmates ran for dear life, out of the bus after the crash, but no such thing happened.)  The driver's minivan sustained considerable front-end damage, of course.  The vehicle, however, was still in working condition.  That helped our frantic subject make his getaway possible with two kids in tow.

Authorities somehow learned that the escapee almost caused another crash in his attempt to evade the law.  That's the panic at work in this guy's head, I guess.  Police tracked down the minivan which had: major front-end damage, smoke coming from the engine, and a heavy marijuana smell coming from inside the vehicle.

Fender benders happen every day.  But what this moron almost accomplished was involving his kids in two crashes in the same afternoon.  The kiddos may end up being psychologically scarred for life without fully knowing why.  They'll probably recall dad driving really fast that one time, and them getting rides from friends and relatives growing up.  And they'll ask one day, did we have a minivan once?

This will hopefully be a learning experience for our reckless driver.  Life is short sometimes.  You have to stop being a menso at some point.  Drive safe.