It Made Sense Once 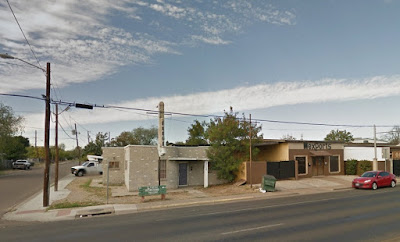 Yesterday marked the one-year anniversary of the Lazy Mex Lounge being demolished.  It was a casualty of Operation: Crackdown, a project that demolishes abandoned structures known to be magnets for illicit activity.  The city and federal authorities have to get permission from the property owners before the razing can happen.

In 2008 I visited the bar to do research for my little website.  It was apparent then that the building didn't serve much of a purpose.

Both photos on this post I obtained through Google Maps.  I had to because I never got around to taking snapshots of the lounge's exterior before it was torn down.

For tax purposes, it probably made more sense for the owner to demolish the old Lazy Mex.  The place had its day, but the 2000s weren't it.
Posted by KeyRose at 2:08 PM