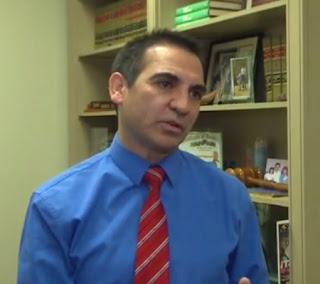 District 8 Councilman Roberto Balli was on Pro8news the other day talking about the disadvantage of running for at-large district seats: needing more money.  His take on the matter is that candidates seeking an at-large council spot would have to lobby the elite among us to rake in the moolah.


He says this type of hybrid system would discriminate economically toward city council hopefuls.  "So that candidates have to go to powerful people, powerful groups ask for large sums of money to run campaigns," said Balli.

This coming from an attorney who owns two properties (that I know of).  I can't assume that all attorneys are flush with cash.  Perhaps Balli is just looking out for the less fortunate candidate who might seek office.  Yet, I can't help but think that he has friends who could fill up a nice war chest for him.  Whatever, let's move on. 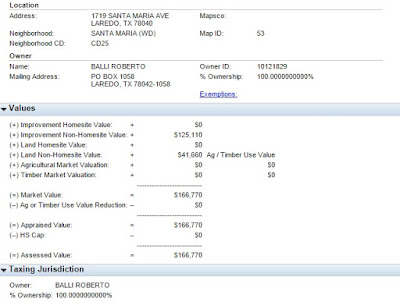 Two years ago, when Balli was running for city council, I wrote about his houses: the one on Santa Maria (District 8) and the one near Alexander High School.  From the image above, you can see that the house on Santa Maria was valued at $166,770 and had no exemptions.  (The house in north Laredo had a homestead [HS] exemption)

A check of Mr. Balli's property information today shows something different -- a change in valuation. 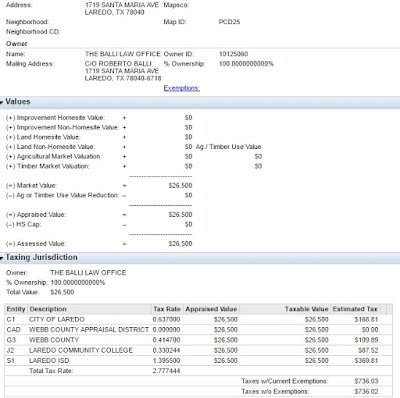 The address is the same and Mr. Balli's name is still on it, but there's a difference in assessment of more than $100,000.  The Santa Maria home/office is a two-story structure and sits on a corner lot.  Yet it's appraised at an amount where Mr. Balli only has to pay $736.02 in taxes for it.

I'm almost tempted to make a call to the councilman and the appraisal office, but what good would that do?  I've given up on the system here.  There are too many things that don't seem right.  Just with this issue alone you have an elected official who supposedly lives in District 8, but his property doesn't have a homestead exemption.  If I would question Mr. Balli on it, he would probably say, you don't really have to live in the district you represent.

And then there's the appraisal difference.  What's up with that?  Perhaps I'm missing something here.  Maybe I'm going about this all wrong.  There might be a perfectly good explanation for all this.  I need someone to explain it all to me.  In the meantime, I'll just turn a blind eye to this.

UPDATE:  A blog reader informed me that the lower appraisal assessment ($26,500) is for the furniture on the premises.  I didn't know the appraisal district kept information on those things.  (Learn something new every day)  Many thank yous to the reader who chimed in.

I put in a call to the Webb Co. Appraisal Dist. but the directory tested my patience.  I sent a message; hopefully I'll hear back from them.  Will follow up on this post ASAP.
Posted by KeyRose at 2:36 PM