The Other Laredo Paper 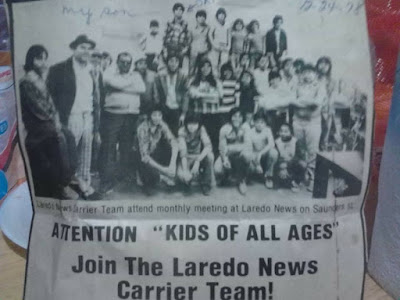 A family member posted this clipping, dated Christmas Eve 1978, on his social media feed last month.    He and a sibling worked for the Laredo News as carriers.  Laredo's population at the time was around 90,000.  The oppressive Laredo heat has always been a constant, but I shudder to think that carries had to maneuver their bikes through unpaved streets, with dust in their face and dogs nipping at their heels.

The Laredo News helped to expose the corrupt dealings taking place in city government.  They were the first to tell the story that led to the downfall of the patron system in Laredo.  And they took the occasional opportunity to jab their competitors, the Laredo Times. 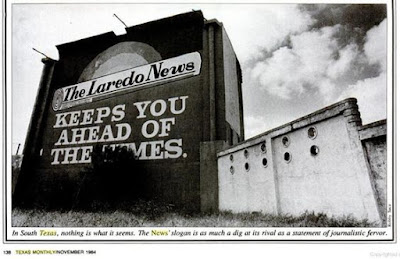 In December 1986 the staff at the Laredo News was dismissed.  Apparently, the paper couldn't survive in this small, south Texas market.  For a short time, at least, they challenged the status quo.

By the way, my letter carrier source said he delivered approximately 120 papers on his daily route.

UPDATE on January 6, 2019.  Photo ad that appeared in local yearbook. 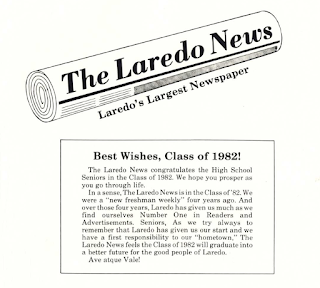 Email ThisBlogThis!Share to TwitterShare to FacebookShare to Pinterest
Labels: The Laredo News