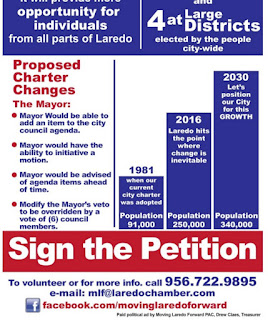 A group of mustachioed professionals concerned citizens calling themselves Moving Laredo Forward are hoping to change things at the city level.  M.L.F. (aka the Chamber of Commerce) wants to have the mayor wield a little more power.  They also want to change the current 8-district council member model to a hybrid at-large/single member system.  They're hoping to get these proposals on the November ballot so the public can decide.  To do that, they have to obtain a lot of signatures: five percent of the electorate.

The proposed changes for the mayor seem kind of arbitrary.  Wanting 6 votes instead of 5 to overturn his vetoes is especially ridiculous.  A simple majority is enough, I think.

But the issue that is getting a lot of people riled up -- or at least those that are paying attention -- is that of having a mix of single-member and at-large representation.  Candidates who would run for an at-large district would have to raise more money and run a bigger (citywide) campaign, but they wouldn't necessarily have to outspend each other.  The trick would be to have a larger pool of friends/connections to win votes.  The thing I don't agree with is that we would be gaining four more representatives.

Our current council members are stretched thin as it is.  They really don't make time to address every issue thoughfully.  Wouldn't a hybrid system give them more responsibility?  And we, as taxpayers, don't really have the time or desire to lobby five different officials.  Who does that?  I don't buy the argument that we will have more council members listening to our needs when apathy prevails in Webb County.

Moving Laredo Forward has until August (so says the city attorney) to get the required signatures to get their items on the Nov. ballot.  It might happen, it might not.  If you want to help, give M.L.F. a call.  They are looking for a few good people.

Do you know anyone reliable looking for a job.  It pays $8/hour and starts immediately.  They would need to collect signatures for a petition.*