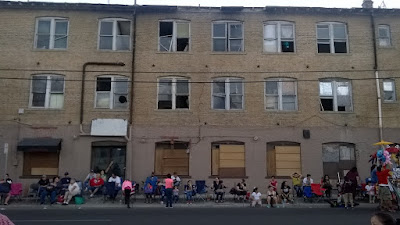 The youth parade was held last Thursday, February 18, in downtown Laredo.  We staked out a spot on the 1300 block of Victoria.  The parade goes on another three blocks from there, ending near St. Peters Plaza.  At 6:30 p.m., the procession had not made it to this part of town yet.

Across the street from the federal courthouse, the former St. Anthony Hotel stands vacant.  It's actually for sale, but who would want to take on the responsibility of restoring the site?  Anyhow, I thought it made an interesting backdrop for the people who lined up to see the parade.  It's an eerie edifice that sits idly by as a parade goes through the motions.
Posted by KeyRose at 2:34 PM