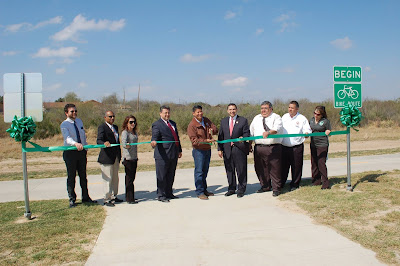 Local officials introduced us to the Chacon Creek Hike and Bike Trail in 2009.  The trail, as it was planned, would one day connect TAMIU with Laredo Community College in south Laredo.  Last week, city staff, elected officials and D.O.T. personnel held a ribbon-cutting ceremony to unveil phase 2 of the scenic, outdoor amenity.  (The project is divided into 8 phases.)

The new route goes between the Haynes Rec. Center on Clark Boulevard and Hwy 359.

At one point I was told that the whole project would be completed in ten years.  But with seven years out, the city has only 2 phases to show for it.  In 2012, the first phase* of the trail was lined with asphalt.  In December 2014, a bat viewing site was dedicated. 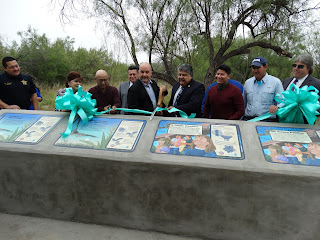 There have been other improvements, such as the addition of picnic tables.  The trail itself, however, is slowly becoming a reality.  (Key word there is slowly.)  To echo a comment I made years ago, I hope I still have the energy to bike this trail when it's fully completed.  By  that time, I may have to ride it on a motorized scooter.
Posted by KeyRose at 3:55 PM