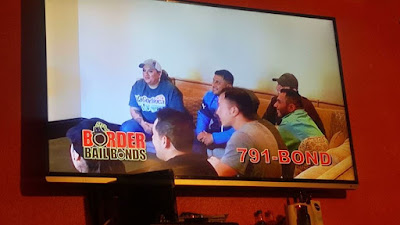 In the second half of the game, I saw a couple of commercials that had some local significance.  One was for Martin Cuellar's campaign, where he flashed a shot of a proposed design for a new Webb Co. jail.  I know he's been talking about wanting a new facility, but I don't know that it's financially realistic.  I tweeted a message to the sheriff's department; Maybe they'll tweet back an answer.

The other commercial I saw was for Border Bail Bonds.  In the t.v. spot, a small group is watching a football game.  The woman sitting on the far left looked familiar.  Was it La Gordiloca?  A social media follower quickly confirmed my suspicion.  The Gordiloca, who has 35,000 followers on Facebook, reports on the carnage that occurs on our city streets in real time.  If there's any damage to property that needs your attention, chances are La Gordiloca will be there to report on it, complete with video footage and commentary.

The only reason I recognized her in the commercial is because the Laredo Times ran a story on her yesterday as well.  The 'internet phenomenon' told the newspaper writer that her introduction to the Laredo masses was when she posted the video of the police response to a double homicide in west Laredo.  On March 9, 2015, two girls were gunned by a neighbor.  La Gordiloca was in the vicinity when that happened and she managed to capture some pretty disturbing footage of the aftermath.

Because of that clip going viral (by Laredo's standards), the Gordiloca was born.

I don't begrudge her taking a pedestrian approach to reporting breaking news in Laredo.  Hell, I wish our local media outlets did more of that.  However, I don't know how much of a shelf life she has if she's only going to be reporting on cars crashing into things.  Good luck to La Gordiloca.  I think there's a void she's filling.  I just hope her M.O. doesn't get tiring.
Posted by KeyRose at 1:46 PM