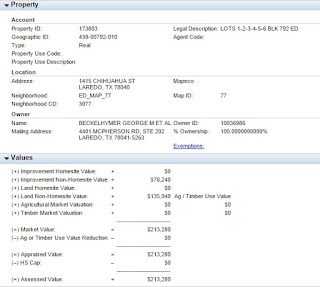 What you see above is the appraised value of the Canseco house located on the corner of Seymour Ave. and Chihuahua (behind Burger King on Guadalupe).  The property is valued at a little over $213,000.  The unique home, which has been vacant for a long time, was discussed during a city council meeting in 2011.  George Beckelhymer spoke about the home's history, and about donating the property to the city. 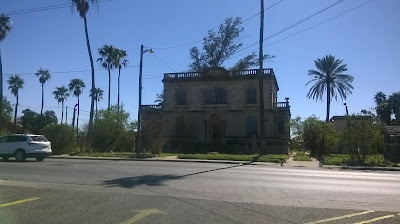 The only thing I've seen at that site that's hinted at any type of construction activity is the placement of orange-painted stakes at the perimeter.

In the summer of 2011, Councilman Alex Perez put forth a motion to have the city lease the property for a "nominal yearly rental with a view towards making renovations to the building."  After that, it was going to be donated. 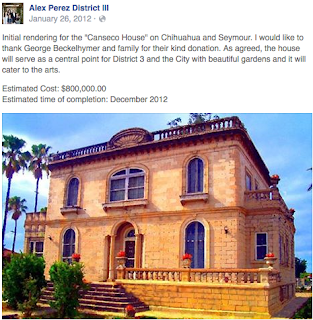 The $800,000 cost he listed I guess was going to be for renovations. #donationofhouse
Fast forward to 2016 and the story has changed.


District 3 update: The City has officially purchased The "Canseco" house for renovation! It will be a majestic project! It will cater to the arts and be a destination place for all! Groundbreaking will be in April.

Apparently the deal fell through; And the city has bought (or is going to buy) the house.  There is an agenda item on for Tuesday's meeting where the Canseco house will be bought by the taxpayers for $450,000.

I'm all for community development, especially when it benefits the older neighborhoods of Laredo.  But how did this deal go from nominal yearly rental to $450,000, courtesy of the people?  What happened?  And how much more is it going to cost to remodel it?

And spare me the "it will cater to the arts" line.  Does that mean cocktail parties for the well-to-do of Laredo?  If the city is going to spend hundreds of thousands of dollars on this house, it should benefit the entire community, for an array of events.

The property was appraised at $213,000.  And the Beckelhymers were paying taxes on that amount.  But to hear the city explain it, the owners are giving us a $90,000 credit and only selling it to the city for 450K.  Damn!  Don't be so generous, Beckelhymers.

I just hope this purchase doesn't turn into the Plaza Theater saga, which was bought by the city and never renovated.  What about the old federal courthouse downtown that was donated to the city?  That was going to house city council chambers.  And then the Cigarroa office building on Logan.  If I remember correctly, the city leased that property for 5 years, but never did anything with it.  I really don't like the way city hall carries out its affairs.  There's a trend here and it doesn't look very good.