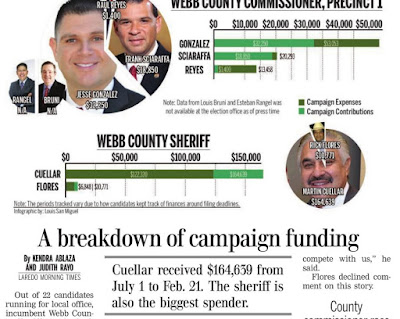 LMT writers Kendra Ablaza and Judith Rayo gave us a rundown yesterday of the monies that local candidates have taken in and what they've spent.  As usual, there is the huge disparity in fundraising between individual campaign coffers.  Sheriff Martin Cuellar came out as the most successful money-getter, raking in a whopping $164,639.

The sheriff has used those funds swiftly, buying ad space on TV, newspapers, and printing glossy fliers that ended up on our front gates.  The photo below is a section of the Laredo Times where Cuellar has presented himself in a favorable light for several weeks now.  In this pic he's posing with what seems to be his laundry order.  Heavy starch, please. 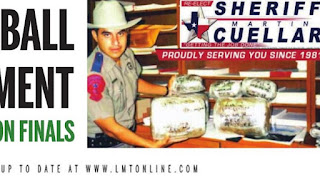 The LMT story had one interesting comment from Cuellar's campaign manager, Colin Strother:


When people have confidence that a candidate will win, they will support them financially, Strother said, adding that he expected more of a challenge from Flores.

The Flores that Strother if referring to is none other than challenger and cowboy hat aficionado Rick Flores.  Strother shouldn't be saying that he expected more of a challenge from Flores when Sheriff Cuellar didn't even show up to debate his arch nemesis in public.  Don't boast, sir. 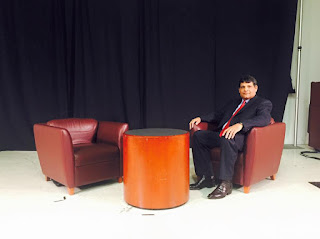 Money apparently buys you premium ad space, and the luxury of not having to show up for debates.  Alas, another Webb County incumbent was a no-show to political forums this year, so there might be some value to going into hiding during election season.

But enough about the sheriff's race.  Let's focus on another anomaly in 2016 campaign finance reporting.  Of course, I'm talking about Louis Bruni and Esteban Rangel not providing any report whatsoever to the elections office.  (refer to graphic above; graphic courtesy of Louis San Miguel)  I don't really care about Bruni's finances.  Frankly, I don't think he's got a snowball's chance of making the runoff for the 5-man Pct. 1 commissioners race.

What's more interesting is that Rangel has no information available for the public, leaving reporters to assign a N/A designation next to his head shot.  Super Tuesday is tomorrow and we don't know who has contributed to Rangel's campaign, or how much he has spent.  A Webb Co. elections office staffer informed me that the deadline to submit reports was February 22, 2016.  Unfortunately, they can't sanction the candidate for neglecting to turn in his paperwork.  There's a different route for that.

Rangel's case is special.  He's made connections at city hall (as a council member) that might give him an edge over other candidates.  #contributions  But he might still be on the hook for paying the city back money that he should not have been getting.  [Rangel was receiving a paycheck as an LISD director and councilman, a state law NoNo]  Rangel has also been using every resource at his disposal as council member to put his name out there:  He's put his face on city library billboards; He's had press conferences for trivial projects; and he even used city property to help him campaign in local parades.

And just when you didn't think it could get any more cynical on his part, he holds out on releasing his campaign finance report.  Administrative misstep or tactical maneuvering?  He has tv commercials airing, campaign billboards with his 'moving forward' message, and a nifty little website that's been public for a while.  That costs money.  I would venture to say that his spending is similar to that of Sheriff Cuellar's.  But as long as nobody asks any questions, he won't bother to be straight with us.

Esteban Rangel was cited for putting up campaign signs with misleading information.  On them he forgot to include the word FOR (county commissioner).  He was basically passing himself off as the real thing.  He was called on it and had to edit his signs.

It's been one disaster after another with this guy, but he thinks he can bring progress to the citizens of Webb County.  Lord help us.  #AnyoneButRangel