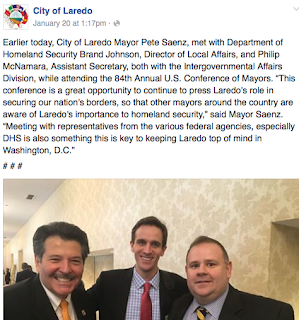 Mayor Pete Saenz recently ventured to Washington D.C. to attend the Conference of Mayors.  (Image via Facebook)  While he was away, Councilman Juan Narvaez filled in as headmaster at the January 19th meeting, the day after the MLK holiday.  Something interesting happened. 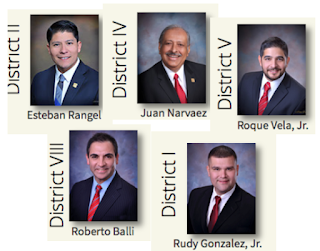 The furious five councilmen pictured above voted to award Altus Construction a $2 million contract to install a water line in the Heights neighborhood.  Nothing unusual, really, except when you take into account the fact that city staff and a consultant urged against it.

My Laredo, a group of local activists, gave us a play-by-play rundown of what happened in council chambers.  On their Facebook page they even included video of the interchange between the council, city staff, and the consultant who was in charge of vetting the contractors.

Initially, Alex Perez made a motion to award the water line contract to Qro-Mex Construction.  They were referred to as the "lowest responsible bidder."  The motion died because of a tie.  (Qro-Mex has contributed money to the city to travel to Washington in the past.)

A representative from Altus Construction was on hand to briefly state his case.  No other bidder was present.  For the next fifteen minutes or so, councilmen went in circles debating the validity of Altus's proposal.  The talk revolved around:


Councilman Esteban Rangel, who is a lame duck of sorts, motioned to give Altus the $2 million contract.  It passed, even after all the red flags were put forward.  Rangel is running for county commissioner.  A special election is being held in 17 days to fill his spot.  But there he was making a major decision: batting for a company whose history is sketchy.

The mayor wants the matter put back on the agenda at the next meeting.  It's a good thing because this water line project being awarded to Altus reeks of cronyism.  Five councilmen, however, didn't see it that way.  On Esteban Rangel's campaign signs, the word FORWARD and PROGRESO (Spanish) are prominently displayed, all without a hint of irony.

Stay tuned as this drama endures. 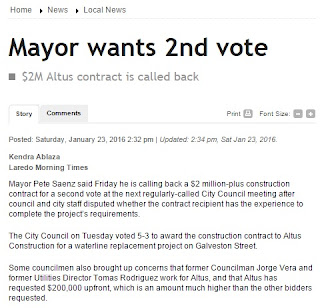