Fax Of The Day 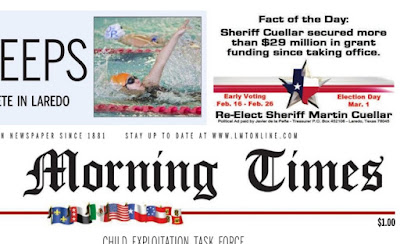 Current Sheriff and speech therapy candidate Martin Cuellar has placed campaign messages on the upper right hand corner of the Laredo Times for several weeks now.  He's been touting his accomplishments as an elected official.  It's a pretty penny he must be paying for ad space, but money is no object when you're going up against your arch nemesis, Rick Flores, in the upcoming March primary.

I haven't checked whether Sheriff Cuellar is posting an "Hecho del Dia" (Fact of the Day) through other media outlets.  It could be that he's partial to the Times.  Or perhaps he's going all out for the final campaign push soon enough, with guest appearances on TV, doing weather forecasts.

We here at LaSanbe world headquarters will keep up with Cuellar's facts of the day, all with a hint of skepticism, of course.  Whether he wins or not won't bother me one bit.  What I find amusing is that elected officials prop themselves up as the better person, until something happens and we find out that they're no better than any of us.

Take, for instance, the recent stories of corruption in the Rio Grande valley.  You have the Cameron County tax office being shut down while officials investigate matters.  Two school trustees enter guilty pleas in nearby McAllen for extortion.  In Corpus Christi, two city employees were using public funds to buy personal items.  The tales of wrongdoing abound in south Texas.  Yet in Laredo, everything is peachy; until it isn't.

It was last year that Commissioner Mike Montemayor, and Justice of the Peace Ricardo Rangel were both sentenced in separate cases for taking bribes.  Laredo is not entirely corrupt, but I wonder why we don't hear more stories of corruption like what's going on in the valley and elsewhere.  There's too much money floating around in Webb Co. and too many favors being done, it seems.  But I guess we're supposed to believe that everything is legit.

Sheriff Cuellar's campaign messages are all well orchestrated, only saying what he wants to put out there.  He plasters his name on billboards and that's all we can expect.  I would be surprised if we got a live debate out of the candidates.  They'll probably take part in some public access forum that nobody will watch.  There won't be any scandals, or dirty laundry put out for us; only facts for us to be impressed by.  And for that, I don't begrudge anyone from not voting.  But that's another subject for another time.
Posted by KeyRose at 3:39 PM