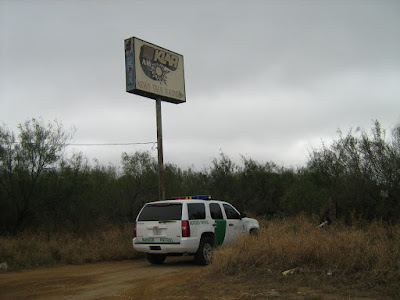 (The photo above is from a blog post from December 2007.)

The wording for the post from eight years ago focused on the issue of protecting our border.  I wonder now how it was that I came upon this scene.  Apparently I didn't set off any alarms for the Border Patrol agent(s) when I took the photo; I wasn't hassled by the man like in another instance.    Looking at the image now, my eyes focus more on the KLAR sign.  The radio station, KLAR 1300 AM, was located somewhere behind that thicket of mesquite trees along Zapata Highway.

In the 1970s, KLAR had a Top 40 format.  It now programs religious content in Spanish. 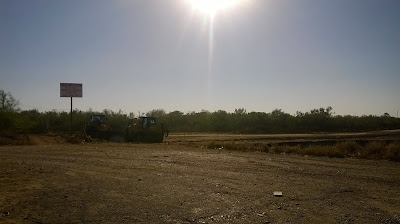 As you can see now, a change has taken place.  It was about two weeks ago that I noticed the land getting cleared.  A friend at work told me that a used car lot was going in to that space.  Of course, what else? 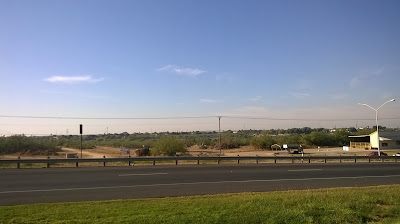 (I shot the photo from a gas station on the other side of Zapata Hwy.)

I'm drawn to scenes like these throughout Laredo.  What seems mundane one day - a sign, a building - will be transformed the next day.  The physical remnants of years gone by are etched in our memories.  We see them daily in our commutes until they're gone.  And then we try to recall how things used to be.

I'm sure I'll come back to this post in five years and marvel at the many changes that have taken place, as trivial as they may seem.  Today, however, I toast to Laredo icons and to progress.  Cheers!