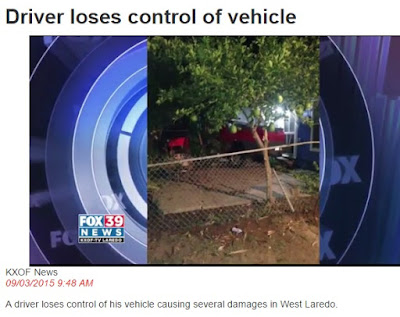 When I got back to blogging last year, I started a new series called 'Laredo's Greatest Hits.'  In those posts I featured reckless Laredo drivers that damaged public or private property with their vehicles.  It was my attempt to highlight the frequency in which these crashes were occurring, even if I was putting a trivial, insensitive spin on them.  But this week has been a little heavy in terms of people having motor vehicle accidents.

In less than a week since three female joggers were run over by a motorist on Jacaman Rd., there have been a slew of crashes throughout the city.  They include:

A car, with a woman and two children inside, hitting an embankment on Arkansas & Montgomery.
A United High School student who ran into a cement fence with his motorcycle.
A motorist who ran into somebody's yard. (see photo above)
A 20-year old who crashed his sports car on Winfield Drive.  He died.
And a young man who ran into a parked truck and damaged other property. (see photo below)

We all lament the lack of proficiency on the part of some Laredo drivers.  They either drive to slow, too fast, or commit some other egregious traffic violation.  However, the recent happenings cannot be downplayed.  The driving culture in Laredo is in serious trouble, and you know it's true when our former sheriff, Juan Garza, was busted last weekend for driving under the influence of alcohol.  If he can't be trusted to take the public's safety into consideration when getting behind the wheel of an  automobile, then why should we expect it of the rest of us?

This Labor Day weekend, law enforcement will be out looking for drunk drivers and those who might be distracted by cell phones while driving.  Good for everybody.  However, I don't see things improving long term for Laredo drivers, pedestrians and property owners.  The only suggestion I can offer is for people to drive and act defensively, because you never know when tragedy is going to strike.

One of the joggers, and the motorcycle rider, are both recovering in a San Antonio hospital.  Our thoughts are with them.  I'll keep my fingers crossed for the rest of us. 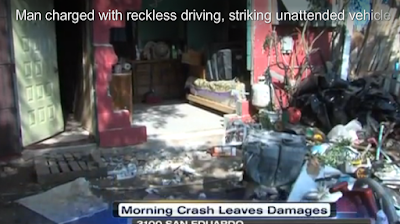