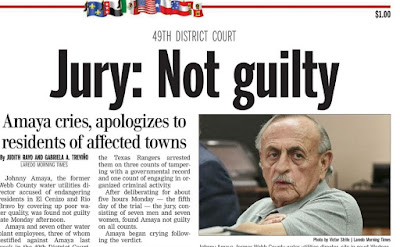 Johnny Amaya was booked last year for allegedly tampering with government records.  As the water utilities director for Webb County, he received numerous reprimands.  In his trial last week, one of Mr. Amaya's subordinates changed his 'not guilty' plea and testified against him.  Amaya was the person who signed off on the water quality reports - the ones that employees said that he ordered them to alter.  Yet yesterday he was found not guilty of tampering with records or engaging in criminal activity.

It all seemed like a slam dunk for prosecutors.  Here they had a man who dressed down for his own trial.  He was so incompetent in his courtroom attire choice as he was in the handling of the water treatment plant.  And the co-defendant turning against Amaya meant a guilty verdict was a lock.  But this was the trial where focus was shifted to the Texas Commission on Environmental Quality (TCEQ).  Apparently they were the ones who were responsible for providing rural residents with contaminated water.  Via the Texas Tribune:


Is it because you think Mexican Americans have a high tolerance for dirty water?

Johnny Amaya was not part of the far-reaching systemic failure in running the water treatment plant; he was only the director of the facility.  And for that he can go home and sleep well at night.

It would be interesting to know if heads were going to roll at the DA's office after this disappointing result.  I don't know, however, if that's the way things work around here.  All I know is that we as taxpayers got screwed after the county kept this clusterfuck of a man on as water utilities director.  All I know is that the people of El Cenizo, and Rio Bravo got screwed for being fed E.coli-laden water.

Johnny Amaya is everything that is wrong with local government.  He was a willing participant in a system that thrives on cronyism.  He is gone now, but his case will be a reminder that people around here, more often than not, don't face consequences for their actions.