He Stands By His Uncle

Former Justice of the Peace Ricardo Rangel begged for leniency at his sentencing trial Friday.  He probably thought he was going to get the book thrown at him like Mike Montemayor.  Montemayor, the former county commissioner, received six years in prison for taking bribes.  Rangel is getting 3 years.

I know I did wrong, but I did more good than wrong.  I know I was getting paid as a justice of the peace, but sometimes it just wasn't enough to do good for people.


I applaud all the public servants who reach out to the community to lend a hand.  Before school started last week, some were out handing backpacks to needy students.  Others provide school supplies or clothes.  Rangel was one who put himself out there for the residents of south Laredo. 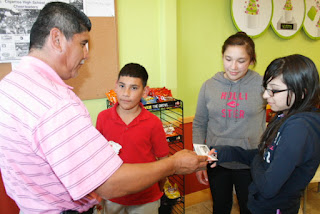 Photo above courtesy of LaredoBuzz.com

But what he sees as good deeds on his part are actually patron-like tactics that the natives are far too familiar with.  His paltry $85,000 yearly JP salary apparently wasn't enough to carry out his compassionate acts for the people -- he had to resort to taking bribes.  At least that's how he rationalizes it.  But how does the Las Vegas trip, courtesy of one bail bond company, fit in to his altruism?  He's supposed to carry out the law, not pervert it for his own sake.

I realize that people go into public service for different reasons: they want to do right by the community; they want to leave behind a legacy; they want to take advantage of the spoils of the system.  Whatever the reason is, I think they get too lax with the rules they're supposed to abide by.  A Rolex watch gift or sporting event tickets are just perks for all the work politicians put in.  It's not really corruption especially if nobody is paying attention. 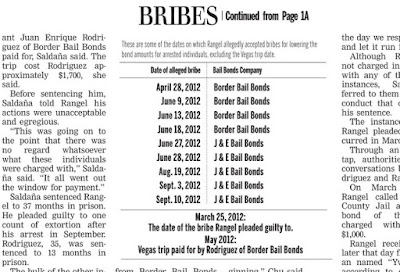 As elected officials we're always understandably in the spotlight.  If you walk down the streets in south Laredo, anyone will tell you that my uncle was a man that was willing to help the people.  There are still those who call him judge because he earned that title through his service to the community.  At the end of the day we respect the law and let it run its course.

It's clear that Councilman Rangel is supporting his now-inmate uncle.  It's natural for family members to stand alongside one another when another commits a crime.  What Rangel fails to realize is that his uncle is supposed to be held to a higher standard, as is he.  The younger Rangel, however, is a political novice and it shows.  He and Ricardo Rangel don't understand that all his supposed good work is now tarnished, and undone, all because the JP was quick to take plenty a kickback.  And spare me the use of "at the end of the day."  That word filler phrase is one of his favorites, and he'll surely use it freely at tonight's city council meeting.

The Rangels of the world can pretend to be Robin Hood all they want.  What we see, instead, are people who are willing to participate in a system that's rigged to their advantage.  No backpack giveaway or turkey dinner hosting can undo the crimes that one person commits.  And for someone else who tries to downplay it all is shortsighted in his/her assessment.  This is a plague upon our society and nobody should stand for it, even if you're related.

Every Laredo politician's "service" is now in question because of what Ricardo Rangel did.