It's hard to take Esteban Rangel's recent comments seriously after I caught an elderly woman, using a Rollator Walker no less, filling her plastic container with water at an Igloo (or whatever they're called) station.  I was driving by the Super S on the corner of Clark and Springfield when I noticed the lady making her purchase.  Apparently the senora de la tercera edad didn't get the memo from Councilman Rangel:  "Since we are in the water business, it somewhat seems it would be doable." (LMT - Kendra Ablaza)  Rangel was commenting on his idea to take over the water treatment plant in El Cenizo, TX. 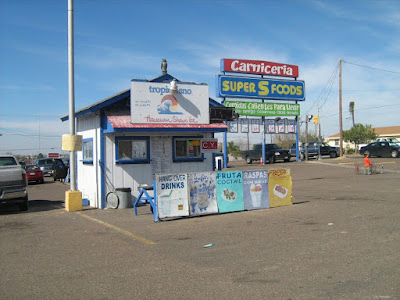 (This is an old photo I dug out of the LaSanbe vault.  Don't look for the lady.)

I don't know if it's shear ego or incompetence on the part of Rangel to think that the City of Laredo could and should take over water-cleaning responsibilities from the county.

Two years ago the TCEQ urged the citizens of Rio Bravo and El Cenizo to boil water meant for consumption because water treatment plant officials apparently weren't up to the task of managing the facility properly.  Now the county is trying to remedy all its water plant woes and its former utilities director is facing criminal charges for fraud.  So, of course, *you know, Esteban Rangel would think that, *you know, now is the perfect time to relieve Webb County of, *you know, its water duties.  He can offer up his plan because, naturally, Laredo has its ship together.

Just yesterday a water main break reportedly took place along McPherson Rd & Manadas Creek, affecting the upper crust enclaves of Laredo, such as Plantation and Regency.  In south Laredo, people who live on Gates St. have had the misfortune of dealing with blockades and heavy equipment because of some street work going on.  Water pipe work?  Most likely. 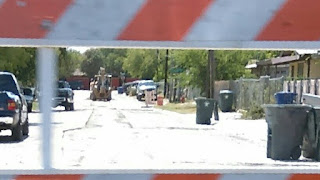 Business owners situated on San Bernardo Ave. are none too happy with all the water service interruptions that have occurred as of late.  I happened to come across that water line break last week when I was making my way out of the downtown area.  Again, there was a blockade and I had to take an alternate route. 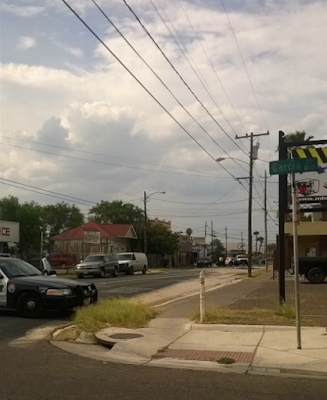 If the streets of Laredo are all bumpy, uneven, it's probably because the utilities department has been there to patch things up.  The photo below I posted on Twitter on June 28.  This street crater I found right in front of the Civic Center Pool....Perdon! The Cecilia May Moreno Aquatic Center. 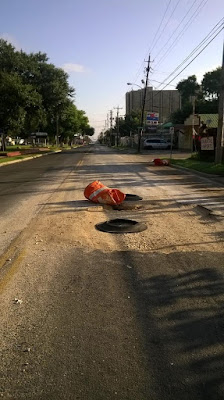 I think it's arrogant of Esteban Rangel to want to wrestle control of the Webb County water plant when the city has its hands full with its own water system.  How can he expect to ease commissioners of its "headache" of a water treatment plant when we've got headaches of our own?  Quien chingows se cree?  So the city has invested heavily in new water treatment systems, so what?  That gives you no right to overstep your boundaries (literally) and insult your county counterparts in the process.  Let the county leaders handle their own problems, just like the city allowed them to manage their own fire and EMS needs five years ago.  They're big boys and they can handle their own big boy problems.

Stop it with these cockamamie pipe dreams, Mr. Rangel.  (I might just trademark that phrase)  Having your political agenda play out through the media is embarrassing.  It's one thing to be diplomatic and sit down with all interested parties in a courteous fashion in order to come to a solution.  What seems to have happened instead is that you didn't do your homework, or consult anybody, and went on about suggesting a plan for the city that may or may not be feasible.  Basically, you're revealing your inner Johnny Amaya, incompetent and ill-equipped as he was.

Do us all a favor and go score some cheap political points somewhere else.

(*you know refers to Esteban Rangel's Tourette's.  He can't utter a single sentence without inserting those two words several times)
Posted by KeyRose at 12:41 PM