What Did Odie Arambula Ever Do To You?

Laredo Times resident columnist Odie Arambula continued to chime in about county business in his weekly post.  And why wouldn't he?  The city council has decided to have only one meeting for the month of July.  While we wait for that meeting of the minds, Arambula reminded us yesterday about the current struggle between Commissioner John Galo and County Auditor Leo Flores.

Rehashing the Galo/Flores drama is a good read, I think.  But it's the last paragragh that ruffled some feathers.  Mr. Arambula wrote:


We found it amusing that a federal grand jury indicted a bunch of several county Utilities personnel on the Rio Bravo water plant mess, but we couldn't even get past the DA's door on the Weatherization dismissals or an Open Meeting violations.  Mark your calendar; the weekend 4th of July fireworks are over and let's see what's in store for next week.

Next week we'll probably have a rebuttal from Mr. Arambula for the succinct message posted on Facebook by the district attorney's office. 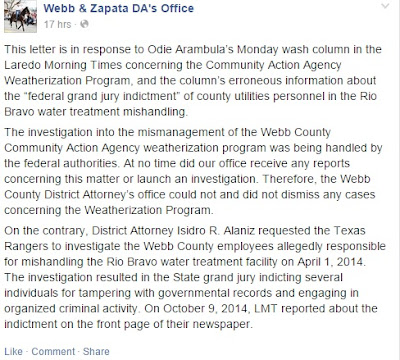 Okay, so the Rio Bravo water plant case was handled by state agencies, not federal.  Point: district attorney and his ghost writers.  But I think the office of Mr.Isidro Alaniz, and the horse-riding DA himself, misses the point about the disparity of indictments that have been focused in one direction.

In the matter of the water plant fiasco, many arrests were made, 8 to be exact.

That was last year.  On the other hand, people that were laid off by the county have yet to answer for their misdeeds.  The Laredo Times reported on November 4, 2010 that the weatherization program had been suspended and several employees laid off.  I think these are the dismissals that Mr. Arambula was referring to.

The arrests in the Rio Bravo case have been swift.  On the contrary, the only ones who have paid for the weatherization scandal have been the taxpayers.  We have squared up with Charlie San Miguel, and now Aaron Ramos (son of Andy Ramos) is looking to get paid for his work.

Isidro Alaniz and his minions have a lot of nerve calling out Odie Arambula for pointing out details in how county matters are addressed.  Instead of trying to defend their honor on social media, they should direct their attention to what's going on in their own house. #fraud #misuseoffunds