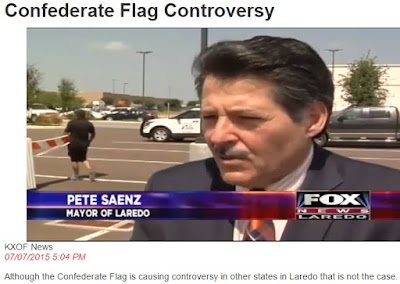 Our LaredoFOX station touched on the Confederate Flag debate going on in South Carolina, where state officials are looking to remove the banner from the state house for good.  Laredo officials are taking a more casual approach to the matter.


Mayor Saenz: Laredo is a sympathetic city for the most part.  I don't consider Laredo as a racist community; it's very tolerant of people's differences and colors.

City Manager Jesus Olivares: Here with the City of Laredo we feel that the flags that are flown over the city are strictly historical and have nothing to do with anything that happens in any other state in the United States.


The mayor's last statement is awkward, to say the least, but I won't dwell on it; I don't know if he was just at a loss for words.  Moving on.

It's interesting that the natives are choosing to cling on to the Confederate Flag, a symbol that has proven to be divisive.  But it goes along with our absurd contradictory nature.  Laredo is 90+ percent Hispanic, but at a drop of a hat we'll criticize anything Mexico.  We love to pronounce la-RE-do in Spanish, but we don't give Tomas Sanchez, our town's founder, a thought.  Instead our parades give it up for George Washington.  We pay tribute to Pocahontas, a lovely female icon with pleasant features, who hooked up with a white man.  But what of the Aztecs or Mayans?  No, ours is a more sanitized history - one that foregoes the "Gateway to Mexico" slogan in exchange for "Laredo: There's Always A Reason To Celebrate."  Gawd forbid we should be associated with our neighbors to the south; They have real problems, ya' know.

If we like something, we stick with it, no matter how ridiculous it seems. (see Laredo Lemurs)  Case in point: a writer's justification for the Confederacy that stems from his version of its legacy.  Via the LMT Sunday issue: 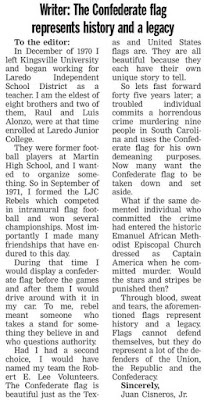 According to Mr. Cisneros, it's more a principled symbolism that dictates our need to co-opt the flag of the Old South.  Forget about the brutal history behind the Confederate Flag.  The men who died fighting Union forces were standing up [to secede, as traitors, for slavery] to tyranny.  It's funny that we're holding steady to defend the legacy of this flag, one that is said to represent states' rights.  Apparently, our former brothers and sisters didn't want the federal government telling them how to run things.  But now, the likes of Mayor Saenz and the rest of the denizens of city hall bend over backwards in justifying to us their Spring Break jaunts to Washington to plead for federal money.

Laredo is a strange place.  Our citizenry has been bequeathed a healthy dose of poverty, yet we cheer on our version of  Martha Washington:  young, fair-skinned role players who may or may not actually live in Laredo, but flaunt gowns worth tens of thousands of dollars.  We pervert history so as to amuse ourselves and promote tourism.  Mr. Cisneros does the same, whitewashes the past, assigning a more noble characterization to a period that divided the country.  Our mayor, meanwhile, thinks there's nothing to see here.  Move along.

It's goofy the things we pick and choose.  Two years ago the St. Peters School mascot name was changed to The Crusaders.  For that one, think holy war and post-911.  We have an elementary school named after one of the most corrupt politicians south Texas has ever seen, J.C. Martin Jr.  We don't have any tributes to Lawrence Berry, or Chaca Ramirez, men who stood up for what was right, but godammit we can show you where Col. Santos Benavides Elementary School is located.

Santos Benavides, to refresh the mind, was related to Tomas Sanchez.  Benavides is hailed for his years of public service.  Oh, and yeah, he was assigned the rank of colonel by the Confederacy.  He in return gave the rebels a hand in transporting cotton along our ever-celebrated trade route.  But Santos Benavides was a rugged frontiersman who fought off federal forces, all in the name of 956 sovereignty.  He's the mold from which we'll draw inspiration.  We will defend his honor, and the flag for which he fought for; never mind that he was on the wrong side of history.  Primo got paid!

We will interpret our legacy.  We may, though, have to jump through hoops to explain why we identify with a Lemur.  It won't make any sense, but it'll make for an interesting story.