Some Carry On With Grace 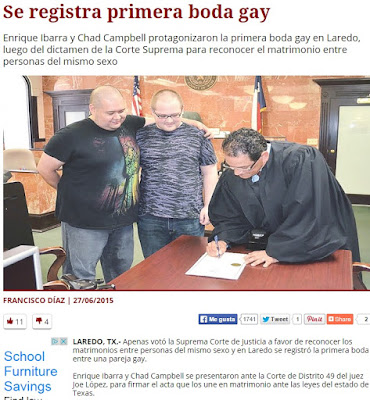 The Supreme Court went public early Friday with the ruling that made same-sex marriage constitutional in all 50 states.  A 5-4 vote made it so.  Within hours, county clerks throughout Texas began issuing out marriage licenses to gay and lesbian couples.  At least one holdout (Bastrop County) requested an opinion from the Texas Attorney General.  Travis County officials, however, announced that they were going to start handing out marriage licenses at 10:30 a.m. Friday.

It wasn't until later in the afternoon that we learned what was happening in Webb County.

Local television outlets were slow in airing news of the first couple married locally (pictured above).  On social media threads, commentary was mostly positive about the developments, but a couple of people made it known that they weren't having it.  They went all wrath-of-God with their opinions on Facebook.  And our local bishop was none too happy either.  He was disappointed. 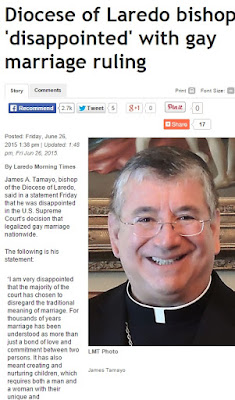 It was truly an historic day for the nation, and for Laredo.  I was frankly surprised by the response for marriage licenses that day.  With Laredo being so conservative, I didn't think more than a handful of couples were going to opt to get married Friday.  But it happened and it's in the history books now.

County Judge (name) Tijerina was quoted in the Saturday issue of the Laredo Times as saying:

I will not discriminate anyone who chooses to marry under this new law.  I have, however, taken myself off the official list for spiritual reflection on the issue.

Judges Joe Lopez, Liendo, and Hale performed ceremonies on Friday, but Tijerina needed a time out.  County Clerk Margie Ibarra never flinched.  She carried out her responsibilities with great aplomb.  She said to KGNS, I never mix government with religion.  I was elected to perform a job.

Kudos to her and to all who acted with grace towards our brothers and sisters.
Posted by KeyRose at 3:54 PM No comments: 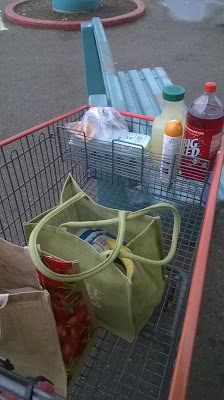 I've been using bags made of canvas, vinyl, even a 'ruede' since before the plastic bag ban was to take effect in April.  What I have found amusing is the way checkout clerks have gone about sacking my groceries.  For one thing, two-liter soda bottles aren't being placed in my reusable bags, even though they don't have a handle like gallons of milk or liquid detergent containers.  Yesterday, however, they took it up a notch.  I was disappointed that the clerks didn't bag several of my purchased items.  (see photo)

Perhaps they're seeing more people not bringing reusable bags into the store, and thus, they just place customers' goods back in the cart.  I don't know what their thinking is, but I want the practice to stop.  If I have plenty of room in my tote bags, then I want all my stuff sacked.  I don't want to have to pull over to the side after paying and proceed to bag items myself.

If this keeps up, it'll go with the motto that I think Laredo should adopt, and that is: Laredo, expect less.
Posted by KeyRose at 3:17 PM No comments:

Dancing For A Good Cause 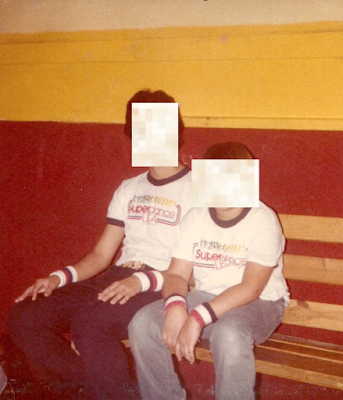 A long time ago in a galaxy far away, there was such a thing as the Super Dance.  I don't recall this ancient occurrence, but sources tell me that said event involved dancing for hours, all to raise money for Cystic Fibrosis.  As you can see from the photo above, things got pretty crazy at those dances.

The person who provided the photo to LaSanbe headquarters has a memory of the Super Dance being held at Mall del Norte.  However, an actual participant of the fundraising fiesta swears that the dance took place at the Pla-Mor Center which used to be located on the corner of San Bernardo and Mann Rd.  It could be that local venues took turns in hosting the big shindig.  Whatever the case, it's fun taking a trip into the past to revisit how Laredoans used to occupy themselves when Jimmy Carter was in office. 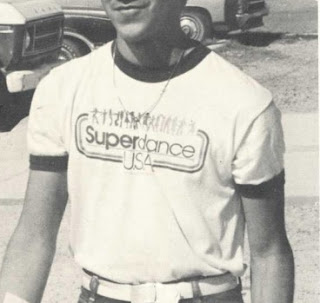 Photo above via Pitahaya yearbook
Posted by KeyRose at 3:01 PM No comments: 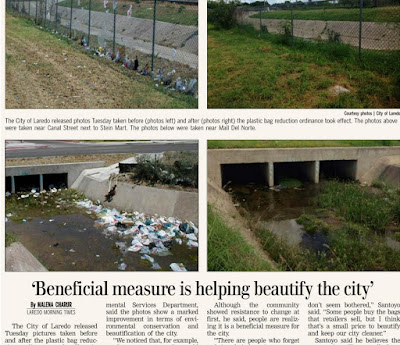 It's been over a month that the city has been encouraging the public and retailers to use anything but plastic bags when shopping locally.  The bag ban hasn't been enforced yet, because of a pending lawsuit.  The citizenry, nevertheless, has made adjustments; and now the City of Laredo has put out a press release to show how good their idea is working.

Behold! (pictures above) how cleaner our environment is now because of people using less plastic bags.  I say less because some establishments are still sacking customers' purchases in thin plastic bags.  It's truly remarkable, the before and after comparison.  It's night and day.

The cynic in me thinks it's all a choreographed move from the city to help the public along in making the change to reusable bags.  And perhaps the judge that is set to rule on the lawsuit against the city can be swayed with the 'irrefutable' proof that the bag ban is worthwhile and legitimate. 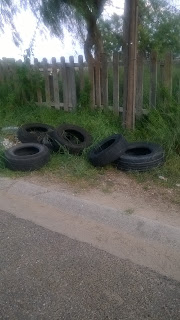 Don't get me wrong - I'm down with the plastic bag ban.  It's just that the images the city provided for local media outlets are suspicious too good to be true.  This town definitely has a trash problem; And the city tries to keep up.  The problem is that local public spaces don't stay litter-free for too long.
Posted by KeyRose at 3:45 PM No comments:

Victories for democrats in Texas are hard to come by, but not so for our very own Richard Raymond.  He's been racking up wins left and right.  In 2007, Raymond successfully passed a motion to put the words "In God We Trust" in the Texas House chamber.  In 2013 he won again with the Christmas bill, which let Texas school officials and staff recognize Christmas without consequence. 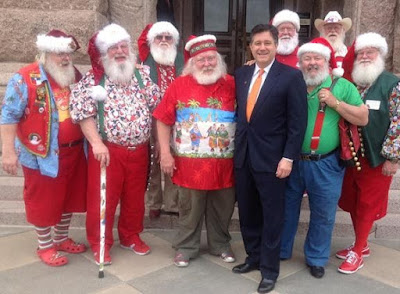 On Thursday (June 11) Raymond scored another victory when Governor Greg Abbott signed Raymond's license plate bill.  The bill will direct DMV staff to create license plates with the words "In God We Trust."  Proceeds from those plates will go to help veterans.

Posted by KeyRose at 1:10 PM No comments:

Expeditious It Hasn't Been

If the Laredo plastic bag ban has taught me anything it's that the natives can embrace change.  The problem is that change is often stymied by the conservative influence that lurks at every corner.

Laredo is a case study in contradictions.  Our geographical location - that of sitting on the Texas border with Mexico - has a lot to do with that.  When you have a clash of cultures, opinions will vary.  Progress, however, can be achieved, as proven by the determined work of the Rio Grande International Study Center staff and its volunteers.  The bag ban is mostly due to their decade-long persistence to the issue.  It's that kind of political will that can improve our fair city.  What gets in the way is complacency, incompetence and partisanship.

Currently the city's plastic bag ban is in limbo.  It was supposed to take effect two months ago, but a legal challenge from downtown merchants influenced city hall to delay its enforcement until a judgement is handed down.  City officials are encouraging retailers and the public to use reusable bags for most purchases.  But for now, no business is being cited for handing out thin plastic bags to customers.  Wal-Mart, as I understand, is still giving its customers plastic bags.

As messy as this whole process has been, I think it's a big win for the city.  The bag ban's viability is still in question, but Laredoans can take solace in the fact that change is possible. 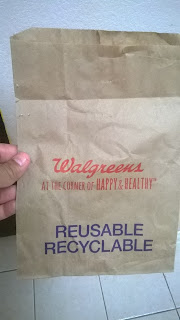 For all the people and businesses who have made the change to reusable bags, despite the bag ban not being fully enforced, I applaud you.
Posted by KeyRose at 4:00 PM No comments:

The First One Closed 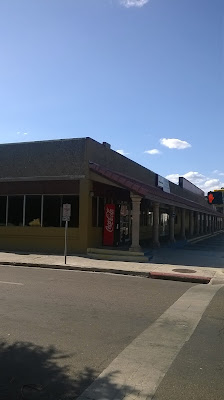 The Laredo Times reported yesterday that the original Danny's Restaurant, located in the downtown area, closed its doors and moved its operation two blocks south.  Danny Lopez opened his first eatery around 1983.  Now if people in Laredo's business district want to sample his now-famous cuisine, they'll have to do it at the old La Roca location, right next to the transit center. 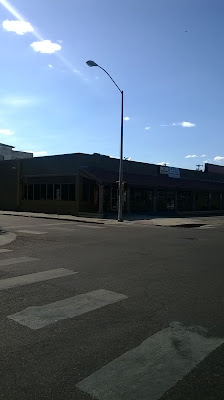 I used to like going to the downtown Danny's because of its slower pace.  I frequent the downtown HEB for the same reason.  Shopping downtown affords you a certain level of anonymity.  You're almost assured of not bumping into somebody you know.  I'm not anti-social; it's just that I like to take care of things without having to engage in chit chat sometimes.

I'm not sure when Danny's on Juarez Ave. opened but I may be able to find out when it exactly closed.
Posted by KeyRose at 1:51 PM No comments:

Laredo Energy got its way yesterday when city council approved two permits for oil and gas drilling within city limits.  Residents of the Green Ranch subdivision, however, don't agree with the decision. 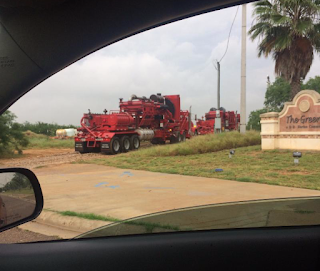 Laredo Energy officials were dumbfounded by the opposition they met for this endeavor.  For them it was a first.  Never had they encountered such resistance when they tried to go on about the business of drilling for natural resources.

Those that don't live in the Green Ranch area, or are local environmentalists, didn't see what the problem was with drill within the city limits.  They pointed to the other wells already present throughout Laredo.  At a recent town hall meeting, Tricia Cortez (RGISC) noted that wells already up and running in the city were installed decades ago.  Since then, fracking techniques have evolved and so have the consequences. 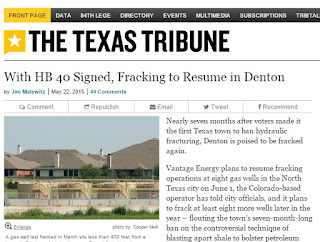 Governor Abbot recently signed into law HB 40, which bans any municipality from instituting fracking restrictions.  Naturally, our representatives voted for the measure.  It's no surprise, really, when our esteemed senator, Judith Zaffirini, is a member of the Eagle Ford Shale Legislative Caucus.  Ironically enough, the texting-while-driving ban that Zaffirini hoped to pass this time around didn't get anywhere again.  She let her displeasure be known by saying, elections have consequences.

The fracking discussion in Laredo started about four years ago.  At a town hall meeting held at the UT satellite campus, I remember Richard Raymond condescending to those who were concerned about the ill effects of hydraulic fracturing.  Now here we are in 2015 and drilling is literally in our backyard and residents are worried.

To get a sense of how our elected officials think in regards to the Eagle Ford Shale, check out this video from 2011 where our then-mayor Raul Salinas champions nothing but the jobs that the oil and gas industry will bring.  Never once did he say anything about the environment or a risk to people's health.  He wasn't a smart man.  All he cared about was his legacy and his photo ops.