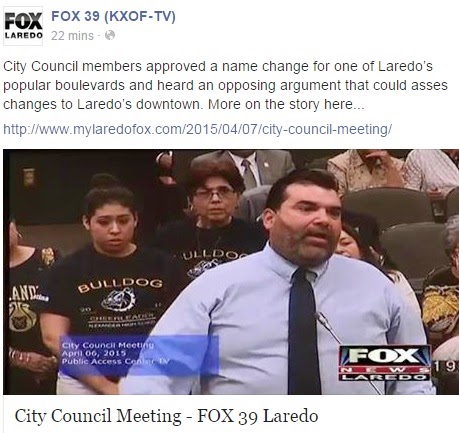 Seven years ago a local teacher requested that the Matamoros St. name be changed in order to clarify its true meaning.  City council was ready to do that, but then the backlash came and they caved.

This weekend we learned that city council was going to discuss changing the name of Del Mar Boulevard to Bulldog Blvd. after staff and students at Alexander H.S. offered up the idea.  Alexander is located on Del Mar Blvd.  Councilman Carlos San Miguel chimed in, "We have to do everything we can to promote education."

The original plan called for renaming Del Mar from McPherson east towards Loop 20.  That was amended to only include the stretch of road from Winfield Estates to an area past the Loop.  Council unanimously voted for the name change, even if it was only going to be symbolic in nature.

Who am I to challenge the intentions of San Miguel, and the people of Alexander H.S.?  If they want to change street names to score points better the community, then so be it.  It's interesting, however, that Alexander's rival, United H.S., has a street named United Avenue.  Oddly, that little tidbit wasn't brought up as a possible inspiration for the name change of Del Mar.

Social media lit up with criticism regarding the name change.  But city council only hears those that show up to council chambers to vent, and then that's a crap shoot sometimes.  For now everybody involved with the Bulldog Blvd. victory will have a warm and fuzzy feeling.  Some day they will be able to tell their children and grandchildren how effective they once were.  Time will tell what effect this will have on other organizations wanting a change to fit their agenda.

Later this week we'll find out what it is that downtown businessmen have in store for the streets of downtown Laredo.  Name-change-gate could be revisited soon enough.

In the meantime, enjoy this short video of Laredo's big promoter of education.