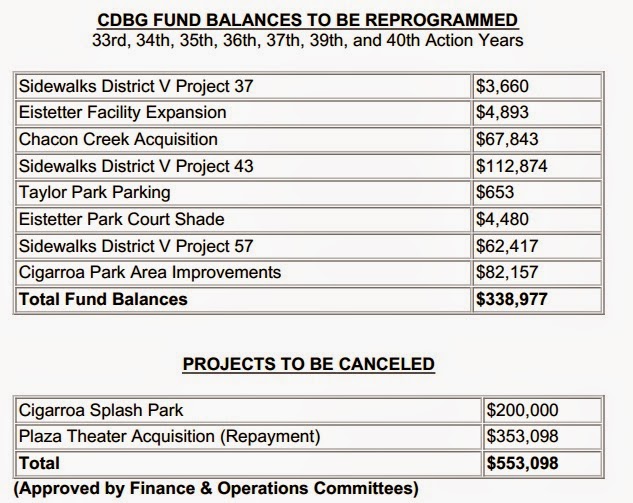 It was two weeks ago that city leaders visited Washington to lobby officials for money.  Nobody questioned whether council members took family members along, or how the trip was funded.  Trivial queries, perhaps, but I would think local media outlets would jump on those matters to fill their news quota.

Anyway, the gains the City of Laredo made in D.C. are unclear.  There hasn't been the usual boasting like we've seen in the past.  Maybe it's because the former city administration was challenged on what benefits it reaped from making the trip that they had to say something, like bringing back funding for the COPS program.  The only story I saw in the news last week was with an airport official talking about trying to get a new traffic control tower.

Apart from airport operations, the health department needs federal money to keep its various programs going.  However, what keeps the world turning for each council member are community development block grants (CDBG).  Those monies allow our elected officials make neighborhood improvements, and thus, use those completed projects as campaign propaganda.  I would do the same, I guess, if I held office.

Some projects take forever to become reality.  The Chacon Creek Hike and Bike Trail started as an idea in 2009.  In current workings, the city is looking to spend $67,843 on "Chacon Creek acquisition" (see figure above) whatever that means.  On the bright side, at least city officials haven't totally abandoned the trail project.  One day I see it becoming a complete reality.  And perhaps then I'll still be able to ride my bike on the trail.

As far as the Plaza Theater, I think that boat has sailed.
Posted by KeyRose at 1:23 PM