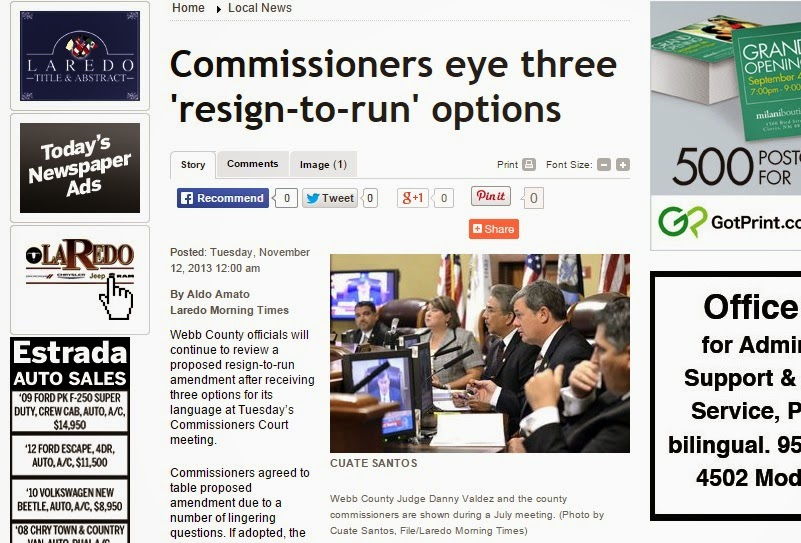 News story pictured above is from November 2013.

Commissioners revisited the 'resign-to-run' rule at Monday's meeting.  Two new faces were a part of the discussion this time around: County Judge Cayetano Tijerina and Francisco Sciaraffa.  Apparently, in 2013, commissioners court couldn't come up with a resolution to the matter.

Watching the rerun of the meeting on public access last night, I was astounded at the confusion the issue created.  Tijerina and John Galo were ready to adopt the new rule of having directors resign if they decided to run for office.  Employees also seeking elected office would fall under the same policy, but because Commissioners Canales and Rosaura Tijerina couldn't agree with the proposal, the item fizzled.

Those that supported 'resign to run' argued that work relations would suffer within departments once a Webb County worker decided to run for office.  A staffer or director could not dedicate themselves to their work, and run for office, they said.  Frank Sciaraffa noted that he took time off during one election cycle to focus on his campaign.  What I remember Frank Sciaraffa not doing is showing up for debates.

Commissioner Galo was inconsistent from beginning to end.  He said he would prefer people familiar with county policies and procedures to run for office, instead of having a layperson come in, who didn't know the work required.  It makes sense -- if the county clerk's office, let's say, needed candidates, you would want somebody who is knowledgeable about the inner workings of the department.  But then he was a vocal supporter of having potential candidates relinquishing their county post if they decided to run for office.  So he wants strong candidates for office at county, but would rather have them quit in order to run.  That's not much of an incentive for qualified people to consider.

It's disgusting to think that people like Judge Tijerina and Galo would think all county employees are financially secure in their lives (the way they are) that each could easily quit their jobs, threaten their livelihoods, in order to run for office.

Jaime Canales pointed to his own experience.  He was a county employee when he ran for office.  Because there was no 'resign to run' policy in place, he was able to attain elected office, he noted.  Rosaura Tijerina disagreed with the policy proposal because, according to her, it would go against the democratic process.

There are countless scenarios at county where individuals have decided to run for office.  Commissioners were narrow-minded in their discussion.  Supporters of 'resign to run' basically wanted to have an all-or-nothing approach, except for elected officials.  But isn't it the case that people like the sheriff or the tax assessor always come under scrutiny for creating problems for staffers when election season arises?

With 'resign to run,' I think county employees are discouraged from challenging incumbents.  Meanwhile, incumbents can have their campaigns partly subsidized by taxpayers.  They could have free access to media outlets.  They could impose upon their subordinates fundraising tools.

I really hope this resign-to-run rule is squashed.  Commissioners court has to realize that it's an unfair proposal, and one that has a lot of unintended consequences.
Posted by KeyRose at 3:00 PM