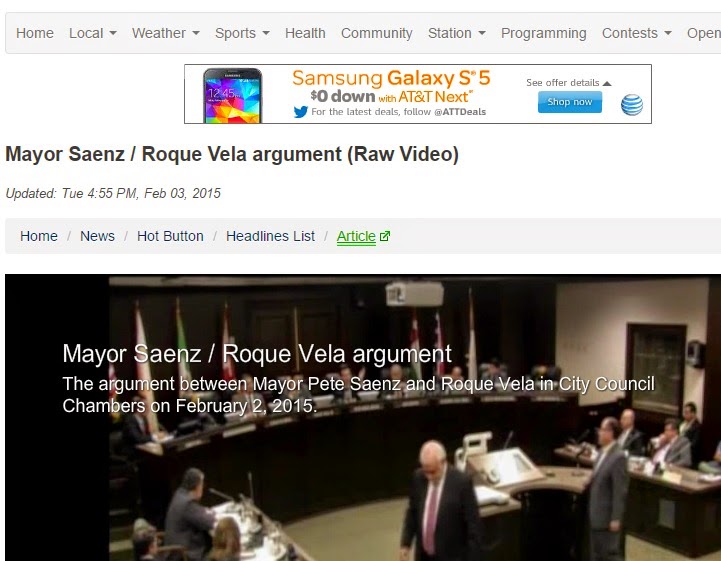 A ruckus occurred at Monday's city council meeting.  At issue was, as KGNS reported, a conflict of interest involving a member of the Regional Mobility Authority.  The group's chair, Reuben Soto Jr., presented this matter to council members.  Roque Vela, however, grew frustrated at the thought that this review of RMA members would stall road projects on Loop 20.

His suggestion was to get a waiver from the TX Attorney General.  Mayor Pete Saenz proposed to appoint somebody else to the committee.

Mr. Soto continued to challenge the combative Vela, and that led the councilman to take on a more derisive tone.  That's when the mayor tired of the badgering towards the speaker at the podium.  (video link)

Roque Vela:  Sir, my mic is on; I'm in a discussion with this man!

Mayor:  And I'm the chair here!

Vela:  And I'm the councilman sitting next to you!

Mayor:  (talking over each other) You're out of order!

Vela:  You're out of order, mayor!

Mayor:  When you're the mayor, you're the chair, you make that decision!

I applaud the mayor for putting the brakes on Vela.  It's gross when a member of the community goes before city council, only to be met with contempt.  Vela should publicly apologize to Mr. Soto and the mayor for his egregious behavior.  I won't hold my breath on that.

Roque Vela Jr. is not the only one that has gotten snippy with meeting attendees.  Others come to mind:  Mayor Raul Salinas, Juan Narvaez, Charlie San Miguel, Roque Vela again.  Perhaps the city charter should include an item to deal with conduct unbecoming a council member.
Posted by KeyRose at 9:18 AM