A major shift has taken place at city hall and George Altgelt wants to be a part of it.  He's vying for the District 7 council seat that was vacated after Jorge Vera's recall on November 4, 2014.  Mr. Altgelt is a good candidate for office.  He's well-educated, grounded, and more importantly, passionate about effecting positive change for the city.

Altgelt wants to promote honest government and thinks the "time is now."  With all the stories of corruption we've had in the last year, the attorney feels it is time for people to get engaged in the political process.  Turnout at the polls has been dismal, and cynicism is at an all-time high, but Mr. Altgelt questions how bad things have to get before people get involved. 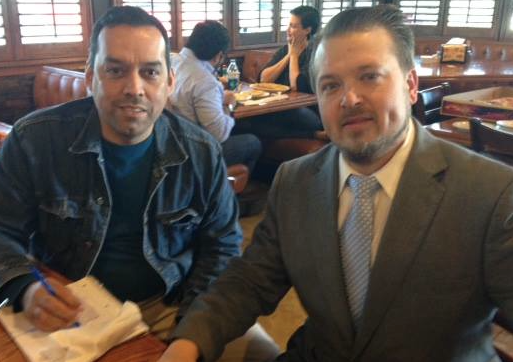 The candidate realizes the sacrifices that have to be made in seeking public office.  However, public service is in his blood and he's ready for the challenge.

The items Mr. Altgelt wants to tackle include quality of life projects, economic development and transportation issues.  He believes good-paying jobs can be brought to Laredo, as long as employers have a sense that local government is business-friendly and trustworthy.  The transportation industry, which provides a lot of jobs for the community, can be complemented with more services and infrastructure to keep the exchange of goods going, Algelt said.

As we spoke about traffic congestion, I could see 18-wheelers go down Mines Rd., one after the other.  Altgelt envisions improving matters for motorists by providing non-commercial lanes for residents and first responders.  I asked him about diverting truck traffic from the downtown area, an idea he seemed receptive to, but he thinks the rail lines could also be moved away from the heart of the city to accommodate thoroughfares for pedestrian or bicycle traffic.

It's a tough gig George Altgelt wants to get in to, and I wish him the best of luck.  He seems steadfast in his plans, and hopes for a better future for Laredo.  I think that's something we all want as well.
Posted by KeyRose at 1:37 PM