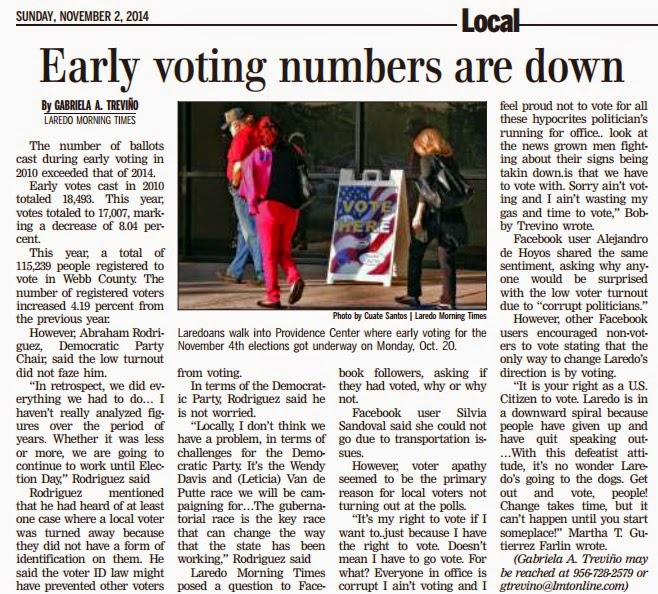 The Laredo Times reported a hike in the number of registered voters in Webb County.  However, early voting ballots cast show a decrease from four years ago.  This could be for a number of reasons: voter apathy, voters being unaware of the election, local corruption, Ebola, etc.  It's disappointing to see less voters going out to the polls, but given the remarkable year we've had in terms of public officials being busted for various transgressions, it's no surprise that people would decide to stay home.  If people don't have faith in their leaders, why vote?

Proven stories of corruption just give people more reason not to get out to the polls.  It's not the only thing keeping voters away.  Campaigns don't advertise long before the election, and when they do, it's usually to a very targeted section of the population.  Would be voters have a tough time making up their minds about all the candidates; limiting their access to information doesn't help.

There is some interest in a handful of seats.  Frank Sciaraffa has a chance of regaining his old spot as commissioner.  And Tano Tijerina will become the new county judge come January.  The county is not at a loss for controversy.  They need a strong leader to sort out all the drama and make things right.

At city hall we'll have a new mayor.  We'll have one councilman who might face jail time for drug possession.  And Mike Garza is on his way out.  Both District 8 and 1 will have a new person in charge.  Whether real change happens remains to be seen.

The Laredo Lizard recently conducted a straw poll for the mayor's race, with Pete Saenz getting a majority of the vote.  However, with seven candidates in the mix, I doubt Saenz will get most of the vote to garner a win tomorrow night.  Given the lackluster early voting numbers, this will be an election of low expectations, and I don't expect any surprise outcomes.  Pete Saenz might win, but I'm predicting a runoff.  Frank Sciaraffa will return to office, if only by luck.  And Jorge Vera will beat the recall.  Again, low expectations.