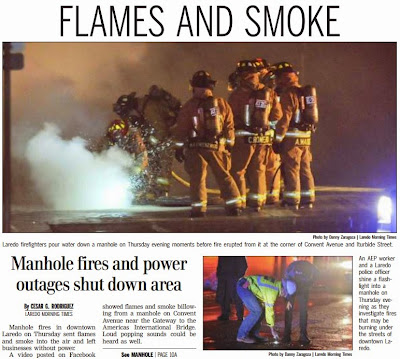 It was November 6, 2014 that downtown Laredo turned into a scene straight out of an action movie.  Fire and smoke was shooting out from underground tunnels and (some) people were running for cover.  That was six days ago and some businesses in the area are still without power today.

Store owners interviewed by KGNS lamented the fact that they were losing tens of thousands of dollars each day their stores couldn't open for business.  Surely it's frustrating for them, especially since Black Friday is just over two weeks from now.

Downtown is no stranger to exploding streets.  In 2010 a pedestrian was injured from a flying manhole cover.  And that same year, retailers were upset that underground work was impeding shoppers' access to some stores.  Add to all of this the lagging economy that has limited buying power for customers, and long wait times at the bridge that deter Mexican shoppers.  Downtown has definitely seen better days.

Construction of an outlet mall should soon be a reality.  Getting people in and out of downtown will be a major concern.  Retailers and shoppers can't have things exploding at any given time; it's not good for anybody.