This Is My House 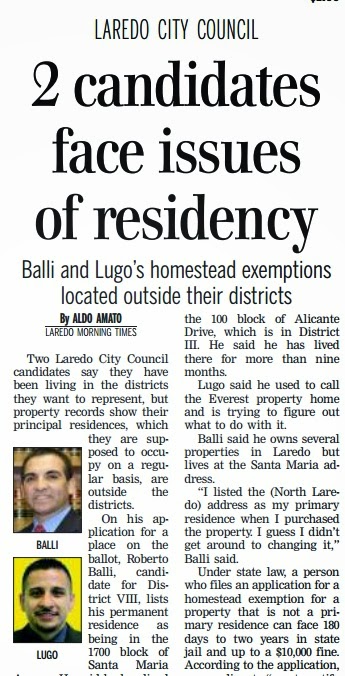 The LMT did some snooping into the residency status of two city council candidates.  Recently I questioned why somebody would go through the trouble of (allegedly) saying they live in one place when overwhelming evidence exists that he/she lives elsewhere.

I don't know what Mr. Balli's or Mr. Lugo's true intentions are; They could have the community's best interest in mind.  But this reeks of carpetbagging.  A candidate has to have lived within the district 90 days before the deadline for filing an application for office.  The city charter is written that way, and some people may take advantage of that loophole.  However, Balli can't make up his mind which property to call home.

Oh for crissakes!!!!  I don't know whether to be upset about his boasting of all the properties he owns, or the tremendous spin he places on the matter at hand.

His case sounds too opportunistic, in my (cynical) opinion.  It's like the mayor running for county treasurer:  instead of running in a race that could be competitive, like that of county judge, he runs for treasurer against people with less name recognition, and the chance of the incumbent retiring.  Balli probably thinks he's got a good shot at winning because he's been on t.v. and probably is chummy with those who can garner some support for him.

When Gene Belmares ran against Raul Salinas four years ago, questions arose about Belmares' ability to connect with south side residents.  He stressed that he and his family had roots in south Laredo.  I don't have numbers of how Mr. Belmares fared at the polls with regards to District 8 support, but he didn't prevail in his running for mayor.  Mr. Balli could be following in Belmares' reasoning -- having confidence in the voters of a district that really don't identify with you.

Good luck to the candidates.  13 days to go until Election Day.
Posted by KeyRose at 11:18 AM