The Worst Of Times

Another shoe has dropped in Laredo in what has turned out to be an extraordinary year in terms of public corruption discovery.  Yesterday afternoon the news broke on social media that former Water Utilities Manager Johnny Amaya was booked for allegedly tampering with governmental records and engaging in criminal activities.  Along with Mr. Amaya, seven other water plant staff members were arrested.

Mr. Amaya resigned as manager on August 21, 2013 after reports of E.coli contamination were released.  A boil water alert was set in motion for residents of Rio Bravo and El Cenizo.  Public outcry was swift, with residents teaming up with the Texas Rio Grande Legal Aid to sue the county for its lack of urgency in handling the matter. 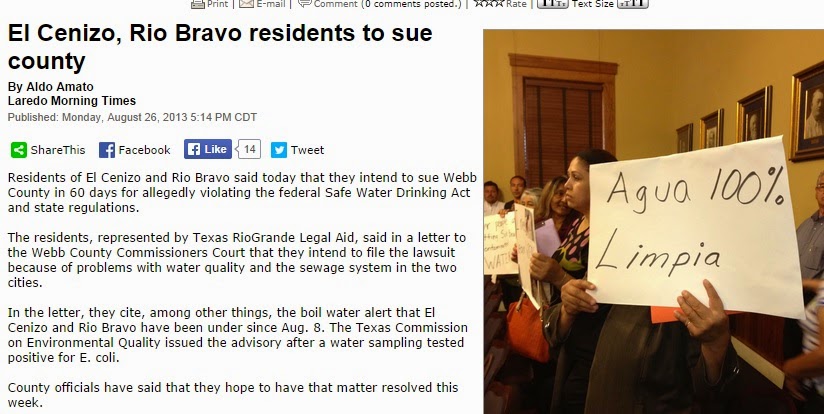 Mr. Amaya had been handed countless reprimands over the course of a decade for failing to carry out his duties.  And at one point he was eligible for termination.  Why wasn't he dealt with more severely before he resigned?  Amid the boil water period, both the county and the city provided drinking water for the residents of southern Webb County. I can't help but wonder if Mr. Amaya would still be employed by the county if the media and the public didn't put enough pressure on county officials.  The DA's office has to be given some credit for pursuing this case, but I think things got more compelling for the county when citizens showed that they were fed up and were taking legal action against them.

The case against Johnny Amaya and his subordinates in noteworthy, not only because of the fact that peoples' lives were jeopardized, but because of the systematic malfeasance that allegedly took place at the water department.  These are amazing times for our community, and all for the wrong reasons.  It's imperative that we take action to make things right.
Posted by KeyRose at 12:00 PM