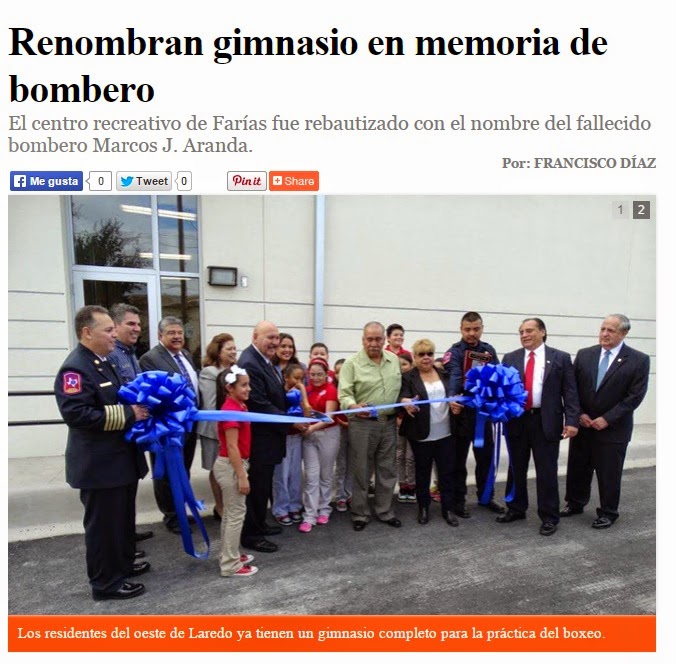 City officials recently dedicated a recreational facility to Marcos Aranda, a firefighter who lost his battle to cancer.  A nice gesture, of course.  My only concern is the presence of Jorge Vera, the councilman who is currently under indictment for drug possession and making a false report to police.  (Vera at far right wearing red tie.)

Vera was supposed to make an appearance at the public forum held at TAMIU on Thursday, but instead chose otherwise.  Media outlets didn't specify why the councilman backed out of the event; but I'm guessing it's because of the possibility of having loaded questions lobbed at him by attendees.

On his FB feed, Jorge Vera rails against those who are trying to malign his character.  He is standing strong and his friends are right there to support him.  So it's natural that he continue, unabated, with the business at hand, what with everybody in your corner.  The photo ops only add to making Mr. Vera the good guy.  Yet, everybody ignores the fact that a police report makes note about cocaine being found in his truck, and then him making a false report to authorities.

Jorge Vera knows full well that the recall election to remove him from office is not going to succeed.

He, and Johnny Amaya, and Mike Montemayor, and Frank Sciaraffa are going to go on about their lives like nothing has happened.  (Montemayor is actually awaiting sentencing)  As long as we keep propping up these ne'er-do-wells with support, they are not going to go away.
Posted by KeyRose at 2:59 PM