It's All Just For Show 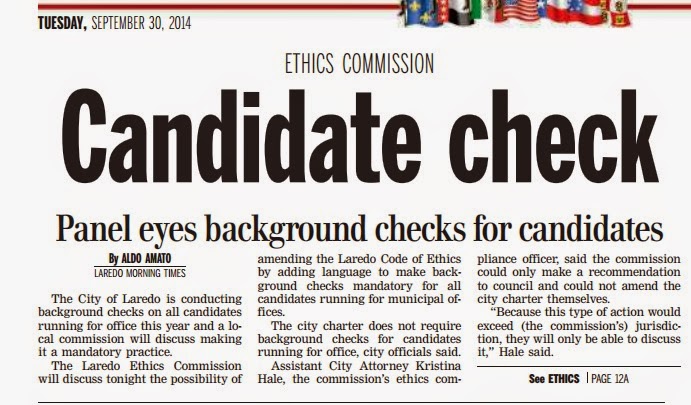 Two years ago the City of Laredo approved a code of ethics, and with it, an ethics commission that would "review allegations" of wrongdoing.  But the commission itself was slow in getting off the ground, and hasn't really made much hoopla since it was set in place.  Now the city seems preoccupied with flaws pertaining to elected officials after Councilman Jorge Vera turned himself in on August 1, 2014 for alleged drug possession and making a false report to police.  Last month city council volunteered to take drug tests, and now they are looking at instituting background checks for elected personnel.

I previously posted a section of the city charter that clearly states that the city council can judge the qualifications of its members.  It can call forth witnesses in conducting its own investigation.  So, for instance, if Charlie San Miguel or Jorge Vera interfered with administrative staff, they could look into that and sanction each person accordingly.  Or if one of their own committed some other serious misstep, they could, again, call in witnesses and get to the bottom of any and all wrongdoing.  But they haven't.  Instead they've taken worthless drug tests, and now are considering background checks.

The city's code of ethics speaks of gifts that elected officials can accept, and conflicts of interests they may have; It doesn't say anything about a council member being caught with cocaine, allegedly.

These examples, however, are not the only issues that should be before city council, or the ethics commission.  One local activist reached out to me about the concern he has with elected officials who are employed by state agencies, and receive compensation as councilmen.  Submission below:


There seems to be a real disconnect from reality when it comes to ethics on the part of some people currently sitting on our city council. This administration in the opinion of many reflects the failure of leadership and vision so sorely needed if Laredo is to succeed in ridding itself of the stigma of corruption and all the ills that accompany this type of behavior.

It exists because we allow it to exist when we don’t exercise our right to Vote!!

When one is elected to office, as in this case our mayor and city council members, one would expect them to know the City Charter from A-Z and be able to recognize right from wrong. Our elected officials have an obligation to themselves and more importantly to the people of Laredo they serve, to provide their best for the community not their worst.

We currently have two councilmen employed by both UISD and LISD, Mike Garza and Esteban Rangel respectively. Both serve in administrative positions in their employment and as such are compensated either in whole or part from state funds.

Which brings into question their eligibility to serve as a member of a local governing body? The answer is yes however, the underlying question here is can they be compensated for their public service NO!!  Article XVI section 40 of the Texas Constitution  states “if the compensation of a public employee, is directly or indirectly funded in whole or part from STATE FUNDS, the public employee (may not) receive any compensation for his or her service as a member of the governing body of a city, school district or other local government district.” Furthermore, “compensation is only permitted for reimbursement of actual expenses, provided the reimbursement is limited to the amount contained in actual receipts or other proof of expenditures.” Currently councilman Rangel receives on a monthly basis- $1000 in salary, $750.00 for home office, $750.00 for transportation (gasoline) and $150.00 for cell phone. Mike Garza on the other hand receives no salary but does receive $750.00 for home office, $750.00 for transportation (gasoline) and $150.00 for cell phone. They both receive the perks but only one receives a salary, why? If you follow the letter of the law as outlined by Texas Dual Office Holding Laws from the office of the Attorney General I think one can safely assume that the compensation of both of these gentlemen is improper.

I look forward to an explanation from the city attorney and/or councilman Esteban Rangel or Mike Garza, I’m certain that the citizens of Laredo deserve it and may also allow them to dispel any appearances of impropriety on their part.

(end of letter)
It's interesting that Councilman Garza would forego his salary, and just depend on his allowances for mileage and home office supplies, especially when state law prohibits anyone from declining compensation in return for serving on a governing body.  (an officer cannot return the pay or benefits of the second office, or simply refuse to accept them, to avoid being considered to hold two civil offices of emolument.)  See Texas Dual Office Holding Laws.

It's a legitimate issue, the salaries of state employees/council memebers, that should be looked into.  For now the ethics commission and city hall do this and that without actually accomplishing anything.  They will, nevertheless discuss the merits of having background checks at tonight's meeting, but what good will that do?

Aldo Amato (LMT) quoted Assistant City Attorney Kristina Hale:
The recommendations would likely be passed on to a city charter review commission, which has yet to be established, Hale said.
Pus chinga' madre!

City council should stop with the theatrics and use the city charter to actually judge their own qualifications, and put to rest any questions/allegations of nepotism, compensation, or illegal activity.  When they actually start demanding more of themselves, then maybe the public will regain confidence in the system and get out to the polls to vote.  The ethics commission would do well to get its  act together too.
Posted by KeyRose at 3:34 PM