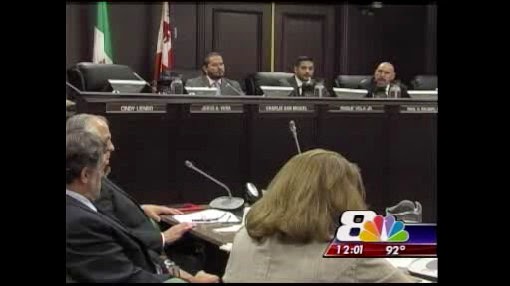 Remember how I said that local politics drive me crazy? (see post below)  Well, it's for good reason.  Last night city council had, arguably, one of the shortest meetings in recent history.  The business at hand was pretty straightforward, so not much was going to be made of anything, except that everybody had Jorge Vera on the mind.  The District 7 councilman was arrested a mere 4 days ago on drug possession charges.

A concerned citizen spoke before the council and requested that they get screened for drugs, all in the name of transparency.  They obliged.  Luckily they had a technician on hand to collect urine specimens to appease the masses.  This is probably the one time that city hall has carried out the wishes of its citizenry.  I digress.

While our leaders were stepping up to prove their moral superiority, they ignored the fact that one of their own had committed a serious offense, allegedly.  The whole affair turned into a figurative and literal pissing contest, with Charlie San Miguel asking to take part in "the most stringent" drug test available.  At no time were any of them under suspicion for drug use, so basically, this was a public shaming of Jorge Vera and his moral turpitude [city charter term].

That was the best the council could come up with -- a passive-aggressive act to save face.  At no time did anyone suggest that Councilman Vera resign.  In today's issue of the LMT, Councilman Juan Narvaez was quoted as saying, "Vera's arrest should not come as a surprise to anyone."  That is a pretty loaded comment.  At least one person (Narvaez) is pointing to the elephant in the room, even if nobody is willing to do anything about it.  The council has powers, however.

Apparently city council can take a stand on the matter regarding Jorge Vera.  They can admonish Vera to the fullest extent of their ability.  Unfortunately, that's not how this council is wired.  Nobody is going to stick their neck out and ask Jorge Vera to relinquish his seat.  They will let somebody else deal with this while they wash their hands of this sordid affair.  (Also, it's advisable to wash your hands after a urine collection)

The night that drugs were found in Vera's truck, allegedly, the councilman was asked to wait in a squad car while police carried out their investigation.  He was not under arrest, but officers were suspicious of Vera's actions that night.

The police report detailed how, while in the backseat of the police car, Mr. Vera used his cell phone to call the Assistant Police Chief to, I don't know, speed things along or something.  It looks like he was trying to throw his weight around.  The jig was up and he was using all his resources to avoid going straight to jail.  But another section of the city charter clearly states that a council member cannot order any department head to do anything.

I don't know what Vera said to the assistant chief, but I'm guessing he was looking for a break.  This same issue came up when Charlie San Miguel took mud run funds home.  The city manager made clear that monies could not be taken home, and that council could not order directors around.

So now we're here with a member of council accused of drug possession and falsifying a police report.  And on top of that, he may have interfered with administration types.  This is exactly the sort of thing that frustrates me about local politics.  A problem is staring our leaders in the face and their response is to piss the night away.  It's one thing for a politician to make a mistake like this.  It's another thing for the others to do nothing about it.