With just over two months left until the general election, at which time a new mayor will be chosen, Raul Salinas finds a new target to pound his fist against, the Laredo Times.  The reason Salinas got upset is because the Times included nothing but public comments from their Facebook feed to write a story about the soon-to-be-built Alamo Drafthouse.  Apparently it was all negative and the mayor took it personal.

I do question the thought process of kicking dirt in the face of a company that is investing $10 million in our community and creating up to 200 good-paying jobs, before it even opens its doors?


The mayor spoke of this at the city council meeting last week, but his thoughts graced the pages of the LMT yesterday.  See below. 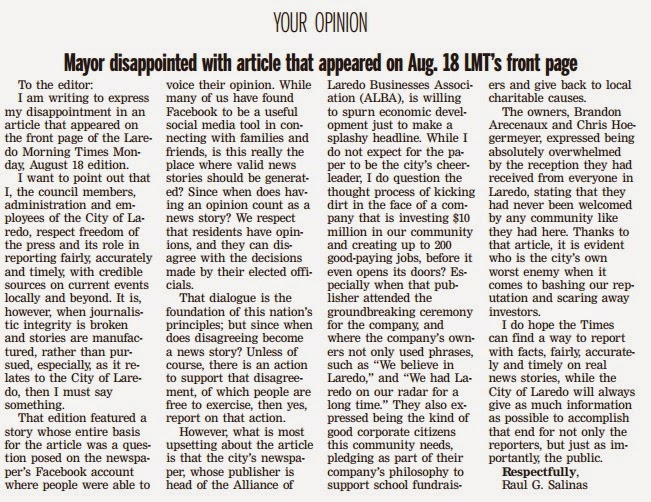 I would like to know who the mayor's ghost writer is, but that's not important right now.  When I first read the LMT piece on the Alamo Drafthouse, I thought it was an uninspired way of bringing us a story.  Like KGNS (Channel 10 on cable) newscasts that fill up time with social media poll questions, I figured it was an attempt by the Times to use up space.  Perhaps the newspaper could use online comments in a blotter-like format.

The story seemed lazy on the part of the LMT writer, but perhaps it was a way of attracting new, younger readers.  The Times needs to work on its news delivery, but it has to sell papers too.  If Facebook comments are going to be a common thing, so be it.

Bill Green, LMT Publisher, submitted his response to the mayor's concerns.  This passage stuck out.

Do you recall when you attempted, as mayor, to ban another publication from the City of Laredo airport? 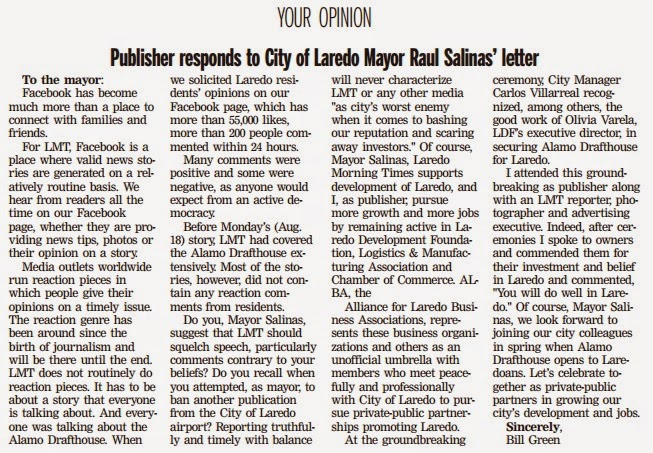 To recap, Mayor Raul Salinas ordered a city employee to remove copies of LareDOS from a facility newstand in 2007.  The publication painted Laredo in an unflattering way, and again, Salinas took it personally.  So maybe Bill Green does have a point that our mayor should not be commenting on anything relating to freedom of the press.  They're free to write anything they want, no matter how trivial it may seem.
The LMT story was mediocre.  Now let's move on.  I love the drama but news stories are not worth losing friendships over.  I say, onward and upward.  But first, let's revisit a moment when the mayor was mediocre himself.  In a 2010 city council meeting, the mayor can't make up his mind about letting people speak at city hall when an investigation is underway.  It's priceless how he changes his mind when challenged by his colleagues.  It's a moment that I'll never forget.  Check out the video (the mayor chimes in at the 2:00 mark).


Raul Salinas, free speech champion.
Posted by KeyRose at 10:23 AM