I told myself that I would stay away from political blogging if I continued updating this site, but the events that have transpired locally are hard to ignore.  I still follow what's going on in town, but spending too much time on city or county government drives me nuts.  At any rate, conversation at all levels has hovered around the investigation surrounding Councilman Jorge Vera.  We first learned last week that Mr. Vera was out enjoying himself at a local bar when a second person, Jose Degollado (son of District Clerk Esther Degollado) was arrested for allegedly selling drugs out of Mr. Vera's truck.  The details of story were sketchy at first.

Mr. Vera was questioned by police that evening, and his truck was searched, but he was ultimately released.  The next day he was deferring all questions to his attorney.  Talk on social media hinted at the facts of the case.  By the end of the week, on August 1st, a warrant was issued for Jorge Vera's arrest; the charge: cocaine possession and submitting a false report.  He turned himself in that same day.

Images of Mr. Vera being handcuffed at the police station are still making the rounds on t.v.

One source tells me that Jorge Vera will attend tonight's council meeting.  He has an item on the agenda concerning the process that should be used in naming public facilities.  Not something necessarily Earth shattering, but he's showing up to represent.  Opinions will abound about his actions, and we'll keep guessing at what should happen next.  One thing's for sure: this whole mess is embarrassing for everybody involved, including us. 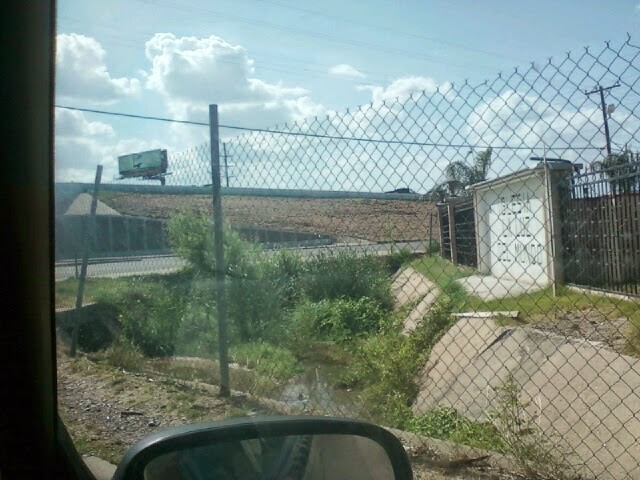 I need to turn to documenting life as it happens on a daily basis, like the images in our lives we process constantly.  We become immune to the peculiarities that pertain to Laredo.  Sometimes it takes people who visit to remind us of how this city is different.

My better half took the picture of the drainage ditch at the corner of Lyon and San Dario.  What caught her eye is that the site has been invaded with overgrown foliage.  Somebody must be responsible for this area.  I'm sure it has to be maintained better than this.  Could be that they'll get to it eventually.  For now it qualifies as a wetland.
Posted by KeyRose at 2:19 PM