Councilman Charlie San Miguel and Laredo Accurate Inspections can now rest knowing that pending payment for services rendered has been submitted.  He's got his money and the case is now considered closed.  But what we know is that the $80,000 Mr. San Miguel was awarded is for the work that passed inspection.  In a previous post I included a passage from a state report that mentioned improper installation of materials (shoddy work) and discrepancies between measures installed and measures invoiced.

Webb County and Charlie San Miguel settled for $80,000.  It may be a while before we know what he initially charged the county.  Naturally, Charlie San Miguel is not going to answer my calls to clarify what his company charged for, and if all the charges were for work that was actually done.  And why would he?  He's got his 80K and it's time to move on.  Or is it? 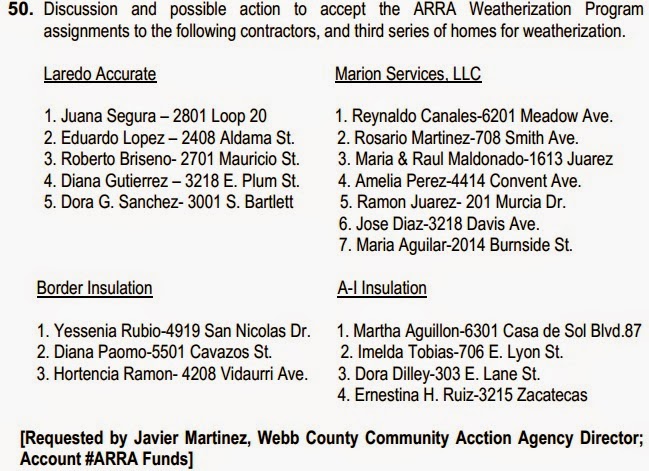 Webb County agenda item from May 2010.

Commissioner John Galo told me recently that other weatherization work lawsuits are coming down the pike, and that the amounts are for much more.  Disgusting.

In a 2011 LMT editorial, Hector Farias Jr. wrote that Aaron Ramos, of Marion Services, did work on his father's home.  The father here is former County Judge Andy Ramos.  I'm not sure if Mr. Ramos has fallen on hard times, but somehow he was approved by somebody at the county for home improvements.

Two things are wrong here: Andy Ramos taking advantage of public assistance to make home repairs, and his son, a contractor, doing the work with the promise of public funds for compensation.

Which company will be next to collect a check from Webb County?  Stay tuned.
Posted by KeyRose at 1:06 PM