Can't Delegate What You Don't Know 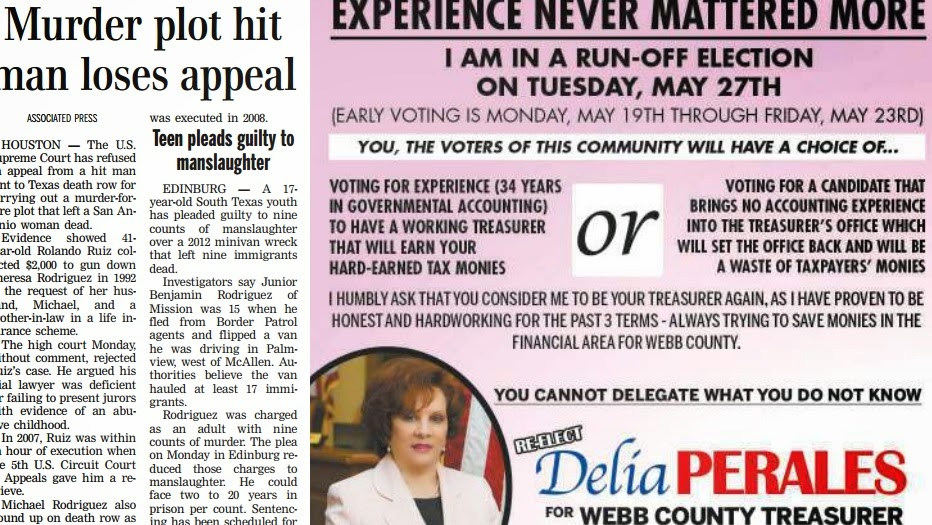 Mid-term elections are interesting because, at the national level, the House or Senate could have a change in leadership.  Predictions so far point to republicans having the edge in taking over the U.S. Senate.  The only thing I can say about that prospect is: thank goodness the president has veto power.  The possibility of dealing with a republican House and Senate will show us whether Obama is truly a weak leader.

For Laredoans, what happens closer to home is more important, at least it is for a small percentage of voters.

Of all the primary races for Webb County, there were a couple that stood out this year: the race for county judge, and county treasurer.  The judge's race is always high profile, filled with heavy hitters, if you will, who have nice war chests and play a good game of politics.  Controversies from the last four years helped Tano Tijerina beat the incumbent, Danny Valdez.  I think that contest played out the way most of us expected.  Commissioners Court didn't take responsibility for all the scandals before them, but voters saw to it that someone was held accountable.  Sorry, Danny.  We'll see if voters keep the trend alive in deciding the Canales (I)/Valdez Jr. runoff race.

A more peculiar race, one that has made me throw up in my mouth on several occasions, is the county treasurer's.  I say that mostly because current mayor Raul Salinas is vying for the spot.  From the get-go I thought this was a very cynical move on his part.  He could've chosen to run for J.P., commissioner, or county judge, but he opted to take the easy road: go out for an office being vacated by Delia Perales and run against virtual unknowns.  Name recognition alone would mean smooth sailing towards the treasurer's office.  But then Delia Perales decided against retiring and put her hat back into the race.

Now the race has turned into a 'he said she said' drama.  Salinas says Ms. Perales would support him in his bid for office.  She says she never said that.  He says it's time for positive change and that he'll bring transparency, efficiency, and accountability to the treasurer's office.  She says practices are already in place that have made the department more transparent and efficient.

He says we're better off with her just riding off into the sunset.  She says she knows what he can do with his gavel.*

(Those last two statements are unconfirmed)

One hopeful sign in this is that Delia Perales has won a runoff before.  The downside is that people don't pay attention to detail and vote instead on instinct.  The only reason Raul Salinas won the mayoral position twice is because he wasn't the other guy (Galo, Belmares).  When you think about it, this gig he's shooting for is much like what he's used to: he doesn't have to make any hard decisions, or cast any votes; he can go around shaking hands and smiling for the cameras; and he can enjoy all the perks that come with the job, such as pay, allowances, and trips out of town on the public tab.

Mr. Salinas is running on the hope that his name and supposed accomplishments can carry him through.  Little does he realize that he's gotten by on luck the last eight years.  He fancies himself the great communicator, and a person of the people, but his political fumbling continues to this day, making it known to everyone that he has no idea what it takes to be county treasurer.

I wish Ms. Perales the best of luck, as well as all the other candidates taking part in the runoff election.