Where Is Their Mind? 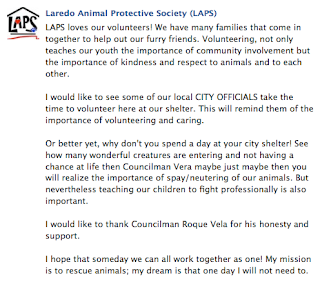 The Laredo Animal Protective Society is not pleased, to say the least, with city council's decision to cut off their funding.  Apparently the city has better things to do with its money.

Let's forget for a while that the city hasn't always been smart with its money, and focus instead on where it stands now.  First, Mayor Salinas is always spouting what he thinks are current priorities for Laredo.  Several days ago he chose safety as priority number one.  (Later it will be jobs, or kids, or his health)  Not that his word means anything at city hall, but the mayor and our elders should see that a strong, viable LAPS organization is good for the city in terms of public safety.

Rabies is one thing, but stray pets present other problems for the people of Laredo.  On my commute to work the other day, several cars in front of me had to break suddenly.  Luckily I was focused on the car ahead of me, if not, I would've hit the automobile.  As it turns out, a dog was wandering in the middle of Zapata Hwy.; That's what caused the cars in front of me to slow down all of a sudden.

Councilman Jorge Vera knows something about having to avoid dangerous traffic situations.  Unfortunately now he wants to look the other way when motorists could be in danger because of stray dogs.

Council met in a special meeting Wednesday to decide what to do with the money they received from the Civic Center sale.  Some of the funds are going into the general fund, and the rest will be used for a sports complex, one with a focus on baseball fields for tournaments.  Uh, we already have one.  In fact, when the city dedicated the Slaughter Park SPORTS COMPLEX, it used kids dressed in their little league uniforms as props as Mayor Salinas spoke.

We need more baseball fields and the Laredo Animal Protective Society can go screw themselves.  It's not like we need more capacity to handle the pet population in Laredo anyway.  I'm sure the new dog pound facility the city built will be able to take care of the city's needs.

Sarcasm aside, I really don't know where city council's head is at.  To deny funding to LAPS is to deny a problem that is right in front of our face on a daily basis.  The city knows full well that the need for public services will only increase as the city grows.  This decision to make a worthwhile organization go on with less is unbelievable.  Council should be ashamed of themselves.
Posted by KeyRose at 7:50 AM